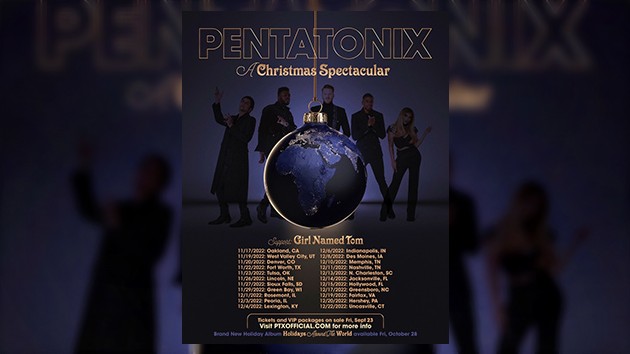 Chances are if you stream a Christmas playlist, you’ll hear a few Pentatonix songs. The a capella group knows the holidays are their time to shine, so they’re launching an all-out seasonal spectacular for their next tour.

Pentatonix: A Christmas Spectacular promises to be “their biggest tour and biggest show yet!” The trek spans 22 different arena dates across North America, starting November 17 with a stop in Oakland, California. Other major cities include Denver, Tulsa, Nashville, Jacksonville and more.

“Come celebrate with us as we embark on our BIGGEST CHRISTMAS TOUR EVER!,” the group announced on Instagram, adding they will be supported by their opening act, former The Voice winner Girl Named Tom.

That’s not the only surprise from Pentatonix. They are also ready to release a brand-new holiday album called Holidays Around the World on October 28. To celebrate preorders opening on Friday, also on their website, they will drop the new song “Prayers For This World.”

In other happy Pentatonix news, singer Scott Hoying is getting ready to marry partner Mark Manio. The 31-year-old told People all about the proposal.

“I have never met anyone that was so kind and selfless,” Scott said, adding that the beach proposal “was the most nerve-wracking thing that I’ve ever done in my life!”

“Even though Mark and I had talked about [the engagement] a million times, I still put the pressure on myself to make it perfect,” he added, revealing they got their rings from Cartier in New York City last Christmas.