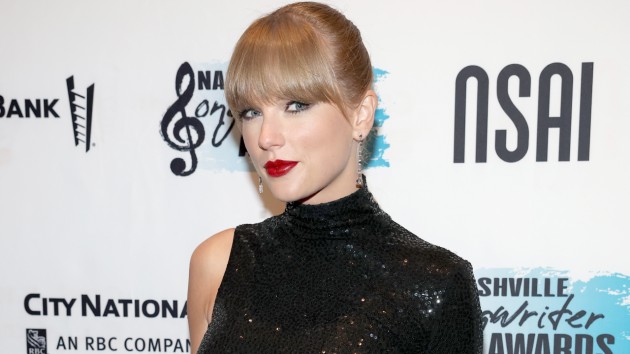 Accepting the Nashville Songwriters Association International award for Songwriter/Artist of the Decade Tuesday night in Nashville, Taylor Swift took the opportunity to reveal a songwriting secrets: It’s apparently all about the pen.

After thanking the NSAI and the city of Nashville for inspiring her earliest songwriting endeavors, Taylor talked about how her favorite part of the process is writing lyrics. She then revealed the “dorky” way she thinks about her lyrics: She puts them into three categories, based on the kind of pen she imagines herself using to write them.

According to Taylor, “quill lyrics” are things that sound antiquated or, as she put it, “If my lyrics sound like a letter written by Emily Dickinson’s great grandmother while sewing a lace curtain, that’s me writing in the quill genre.”  She gave an example by reciting lyrics from “Ivy,” from her album evermore.

Next, she said, are “fountain pen” lyrics, which have “modern references, but with a poetic twist,” and sound like “confessions scribbled and sealed in an envelope, but too brutally honest to ever send.”  She quoted “All Too Well” — which she performed at the ceremony — as an example of that genre.

The third category, Taylor said, is “glitter gel pen,” which she described as “frivolous, carefree, bouncy.” To illustrate that genre, she quoted “Shake It Off.”

Taylor added, “Why did I make these categories, you ask? Because I love doing this thing we are fortunate enough to call a job. Writing songs is my life’s work and my hobby and my never-ending thrill.”

She concluded, “I am moved beyond words that you, my peers, decided to honor me in this way for work I’d still be doing if I had never been recognized for it.”

There’s fan-recorded video of the whole speech on YouTube.