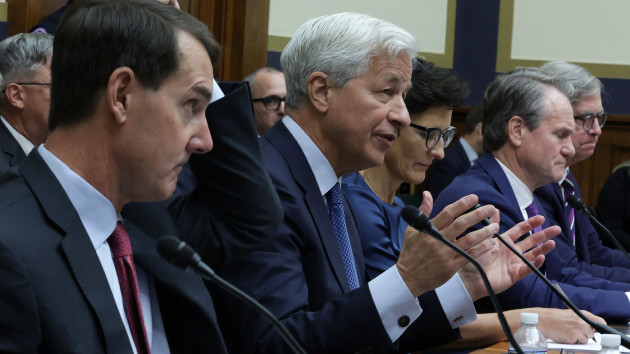 (WASHINGTON) — Chief executives at some of the largest U.S. banks sounded the alarm over sky-high inflation in testimony before Congress on Wednesday, warning that price hikes would require further borrowing cost increases from the Federal Reserve that will slow the economy and impose widespread financial pain.

The Fed has instituted a series of aggressive interest rate hikes in recent months as it tries to slash price increases by slowing the economy and choking off demand. But the approach risks tipping the U.S. into an economic downturn and putting millions out of work.

“We’re very concerned about the high prices consumers are facing in America and indeed around the world,” Fraser said.

The Fed’s continued interest rate hikes will put the brakes on economic activity and cause economic hardship, she added.

“The impact of higher rates that are required to try to tame the inflation is likely to be moderating growth in America and around the world, and will be putting pressure on many of the drivers of the economy,” she said, adding that the bank “expect[s] tough times ahead.”

“Those things will absolutely cause a slowdown in the economy and at one point increase unemployment,” he testified Wednesday.

Last week, the government released a higher-than-expected inflation report that revealed prices had risen slightly in August, worsening cost woes for U.S. households and sending the S&P 500 tumbling for its worst day of 2022.

Speaking at a conference held by the conservative-leaning Cato Institute, Fed Chair Jerome Powell said earlier this month that the central bank must act “forthrightly, strongly” to dial back inflation.

The combination of those comments and the inflation data last week led many economists to expect the 0.75% interest rate hike the Fed instituted on Wednesday.

So far, rate increases appear to have slowed key sectors of the economy, sending mortgage rates higher and slowing the construction of new homes, for instance.

Despite rate hikes, Dimon said the U.S. could avert an economic recession, noting the possibility of a “soft landing,” in which the central bank dials back inflation but does not cause an economic slowdown.

But the U.S could instead enter a mild or severe recession, and could even face a more severe downturn, Dimon said.

“Because of the war in Ukraine and the uncertainty it causes in the global energy supply and food supply, there’s a chance it could be worse,” he said.

“The American consumer is actually still in rather good shape,” Dimon said. “They have a good balance sheet, their debt balances are low, confidence levels are going, jobs are plentiful.”

Fraser, of Citigroup, added: “We’re fortunate to have the consumer in good health entering this.”

Some indicators suggest that the U.S. economy continues to hum.

U.S. hiring fell from its breakneck pace but remained robust in August, with the economy adding 315,000 jobs and the unemployment rate rising to 3.7% as more people sought work, according to data released by the Bureau of Labor Statistics in early September.

“Inflation is affecting those the most that can afford it the least,” said Andrew Cecere, the CEO of U.S. Bank. But, he added on a positive note, “Savings levels continue to be above pre-pandemic levels.”