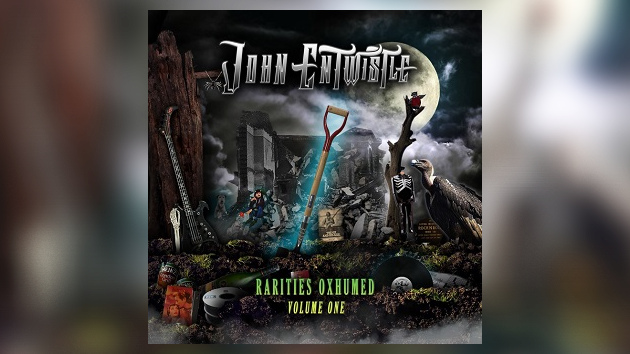 A newly remastered version of “I’ll Try Again Today” was released Friday as an advance digital single. The song previously appeared on The John Entwistle Band‘s 2000 album, Music for Van-Pires.

The compilation includes a song called “Bogey Man,” which includes a guest appearance by late Who drummer Keith Moon, and a demo version of “Where Ya Going Now,” a tune that John had intended for The Who to record.

Rarities Oxhumed — Volume One also features several tracks that appeared on Music for Van-Pires, which was The John Entwistle Band’s final album, as well as that group’s live renditions of The Who’s “Trick of the Light” and the Roger Daltrey solo hit “Under a Raging Moon.”

Rarities Oxhumed — Volume One is the first in a series of planned Entwistle compilations that are being put together by Entwistle Band drummer Steve Luongo and the Deko Entertainment label.

“John and I began touring together in 1987. Every tour was more fun than the last. That was the idea. Play loud aggressive rock & roll, have fun, laugh our a**es off, travel to the next gig, and repeat,” Luongo says. “During the 15 years that we worked together as a rhythm section, we remained true to that cause. Along the way we recorded some records and created a sizable catalog of ideas and material for the future. The future is now.”

You can preorder the album, as well as special bundles, now at Merchbucket.com.