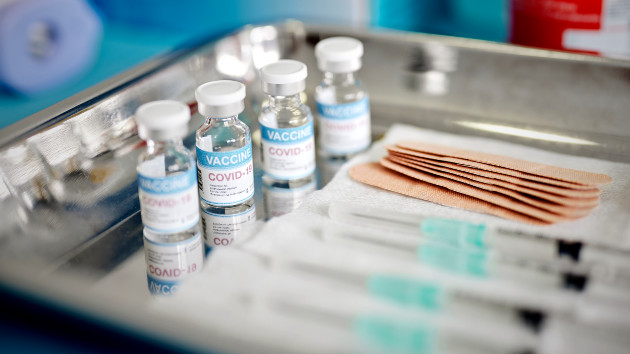 The new booster shots have been updated to target two different COVID strains in one shot — the current omicron subvariants, BA.4 and BA.5, which make up 99% of new cases in the U.S., and the original strain of COVID-19.

This is the first time current COVID-19 vaccines have had a major upgrade. In the future, experts expect the vaccines could be updated periodically to match current strains — akin to the way the flu shot is slightly different each year.

Walensky urged eligible Americans to get the shot.

“The updated COVID-19 boosters are formulated to better protect against the most recently circulating COVID-19 variant. They can help restore protection that has waned since previous vaccination and were designed to provide broader protection against newer variants,” she said in a statement.

Public health officials directed the vaccine companies to create a bivalent vaccine — a vaccine that targets two different strains — in the hopes that the compilation will provide broader protection against COVID this fall and winter, as infections could rise with flu season, the cold weather and more time indoors.

Earllier Thursday, the panel of CDC advisors publicly reviewed the data before taking the vote. Thirteen members approved the measure while one voted no and there was some debate ahead of the vote over the lack of available data.

In order to roll the vaccines out by next month and offer people protection this fall and winter, the companies submitted data to U.S. Food and Drug Administration without full clinical trial data.

Some members of the CDC panel were concerned about the precedent that it set to recommend a vaccine without data from human trials.

“Ultimately, I really don’t want to establish a precedent of recommending a vaccine that we don’t have clinical data for,” Dr. Pablo Sanche said.

Other members said they were comfortable with the risk-benefit analysis.

“I just would like to remind the committee that every year we use influenza vaccines that are based on new strains, without clinical studies being done. This is what we do every year,” Dr. Melinda Wharton said.

Appointments could ramp up in earnest after the holiday weekend.

The U.S. government has purchased about 171 million shots, between contracts with Pfizer and Moderna.

Both bivalent vaccines are authorized for use two months after people have received either their primary vaccine series or their last booster shot.

The CDC’s vote came a day after the FDA issued its emergency use authorization for the updated booster shots.

“It is matched to what is currently circulating. And the hope here is that by increasing the amount of antibodies we have to that particular variant, we will restore the kind of protection that we had when we first saw these vaccines launched in the late part of 2020, early part of 2021 where we had very good protection against symptomatic disease,” Dr. Peter Marks, director of the FDA’s Center for Biologics Evaluation and Research, told reporters in a press conference on Wednesday morning.

“We don’t know for a fact yet whether we will get to that same level — but that is the goal here. And that is what we believe the evidence that we’ve seen helps point to,” Marks said.

Marks also emphasized that it’s not only about boosting antibodies to beef up immediate protection, but about working toward annual shots rather than boosters every few months.

He said he’s hopeful that rolling bivalent boosters out now will tamp down an incoming winter wave and “hopefully bring us the protection we need through October, November, December to prevent yet another way that shuts down things like holiday plans.”

Marks was hesitant to give an exact timeline on when the shots would be authorized for people under 12, but said he expected more data in a few months.

“I can’t promise an exact timing, but we expect to start seeing … that drop down into the younger age ranges within the next one to two months,” Marks said.

“And so as we get submissions from the companies, we will act on them with all due diligence, because we’re aware that there are, particularly in the slightly older age ranges of children, some children that are coming due for boosters,” he said.

“Regrettably, only about half of eligible Americans have received their first booster dose,” Dr. Bob Califf, FDA commissioner, told reporters in the same press conference.

“CDC data indicate that those who are up to date on their vaccines have a 13-fold lower risk of dying from COVID compared to those with no vaccination, and a three-fold lower dose of dying than those who only had one booster compared to two. So this is a remarkable opportunity to improve our life expectancy and reduce the toll of mortality in our population,” Califf said.

Unlike the original vaccines and boosters, these new shots will not go through a lengthy clinical trial process where thousands of Americans are dosed with the vaccines to test their safety and long-term effectiveness. However, federal health officials stress that these new shots will still be just as safe as the original vaccines because the underlying vaccine platform, mRNA, is the same, and has been through many varying clinical trials.

Part of that review was an evaluation of a clinical study of a different updated booster shot that vaccine companies had made during an earlier omicron wave. The clinical trial of that booster shot, which targeted the BA.1 variant and the original strain of COVID, was considered relevant enough to the bivalent vaccines targeting the BA.4/BA.5 variant and the original strain of omicron.

Officials also said that the decision not to use time-consuming clinical trials for each new shot is a strategic move, in an effort to keep vaccines up to date with the rapidly evolving variants — a process that will likely mimic how the flu vaccine is altered each year.

“If we waited for all the proof to come in, the wave will have already passed us by and the damage will have been done,” Califf said.

“It’s fair for people to raise questions. But this really is the best consensus that we have among the experts that this is the best way to go,” he added.

Marks also repeatedly defended the data FDA used to make this authorization — clinical trial data on a bivalent vaccine that targeted a different omicron subvariant and the original COVID-19 strain, making it very similar to this booster shot that targets the BA.4 and 5 subvariant along with the original COVID-19 strain — as well as real world data of millions of people who have gotten the mRNA vaccines and boosters globally.

“I think we’re pretty confident that what we have is very similar to the situation that we’ve done in the past with influenza strain changes where we don’t do clinical studies for them in the United States,” Marks said.

“We know from the way the vaccine works, and from the data that we have, that we can predict how well our vaccine will be working,” he added.