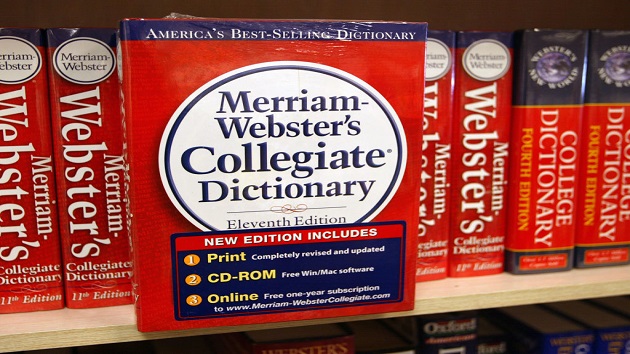 (NEW YORK) — A disgruntled man upset about Merriam-Webster dictionary’s update to their definitions of gender pronouns and adjectives to make them more fluid has pleaded guilty in a federal court to making bomb threats and for threatening to kill the company’s employees in a mass shooting.

The U.S. Attorney’s in the District of Massachusetts alleges that Jeremy David Hanson, 34, of Rossmoor, CA, anonymously sent “various threatening messages and comments demonstrating bias against specific gender identities submitted through its website’s ‘Contact Us’ page and in the comments section on its webpages that corresponded to the word entries for ‘Girl’ and ‘Woman,’” between the dates of Oct. 2 and Oct. 8, 2021. Authorities later identified the user as Hanson.

“Specifically, on Oct. 2, 2021, Hanson used the handle ‘@anonYmous’ to post the following comment on the dictionary’s website definition of ‘female:’ ‘It is absolutely sickening that Merriam-Webster now tells blatant lies and promotes anti-science propaganda. There is no such thing as ‘gender identity.’ The imbecile who wrote this entry should be hunted down and shot,’” authorities said in the statement.

A short time later, the U.S. Attorney’s Office said Hanson sent them another message, this time via the “Contact Us” page on their website.

“You [sic] headquarters should be shot up and bombed. It is sickening that you have caved to the cultural Marxist, anti-science … agenda and altered the definition of ‘female’ as part of the Left’s efforts to corrupt and degrade the English language and deny reality,” the second online threat read in part. “It would be poetic justice to have someone storm your offices and shoot up the place.”

A third threat was sent to Merriam-Webster as a comment on their website on Oct. 8, 2021 which read: “I am going to shoot up and bomb your offices for lying and creating fake definitions,” the message said. “Boys aren’t girls, and girls aren’t boys … I will assassinate your top editor.”

Following these specific and credible threats, Merriam-Webster closed its offices in Springfield, MA, as well as in New York City for five days.

Hanson also admitted in court this week that he often selected the object of his threatening communications because of the “gender, gender identity and/or sexual orientation of various persons,” said the U.S. Attorney’s Office.

“Every member of our community has a right to live and exist authentically as themselves without fear. Hate motivated threats of violence that infringe upon that right are not tolerated in Massachusetts in any capacity,” said United States Attorney Rachael S. Rollins. “This conviction represents my office’s dedication to protecting targeted communities and bringing accountability and justice when those who aim to endanger act upon their hatred.”

Hanson pleaded guilty on Wednesday to one count of interstate communication of threatening communications to commit violence against the employees of Merriam-Webster, which carries a potential sentence of up to five years in prison, three years of supervised release and a fine of $250,000, according to a statement released by U.S. Attorney’s Office for the District of Massachusetts.

“Jeremy Hanson is now a convicted felon after admitting to making hate-fueled threats of violence related to the LGBTQ+ community,” said Joseph R. Bonavolonta, Special Agent in Charge of the FBI Boston Division. “If you believe you are a victim or a witness to similar conduct, we encourage you to report it to the FBI so we can hold the perpetrators behind these crimes accountable for their actions, like we did in this case.”