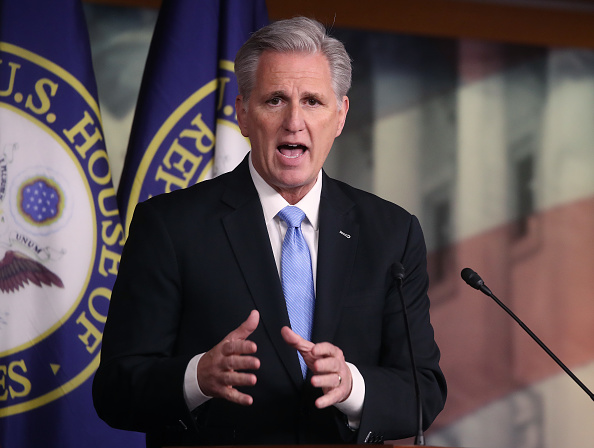 (EL PASO, Texas) — House Republican Leader Kevin McCarthy on Tuesday called on Homeland Security Secretary Alejandro Mayorkas to resign over the administration’s immigration policies and raised the possibility of an impeachment inquiry if he doesn’t.

Speaking at the border in El Paso, Texas, McCarthy said Mayorkas “cannot and must not remain in that position.” He said if Mayorkas were in charge of any company, he would “have been fired by now.”

If Mayorkas does not resign, McCarthy said, “when we take power” the incoming Republican-led House will investigate whether to launch an impeachment inquiry against him, McCarthy said.

“House Republicans will investigate every order, every action and every failure will determine whether we can begin an impeachment inquiry,” McCarthy added.

McCarthy said he had spoken to GOP Reps. Jim Jordan and James Comer, the respective incoming chairs of the House Judiciary and Oversight committees, about launching investigations into Mayorkas’ handling of the border.

“They have my complete support to investigate the collapse of our border and the shutdown of ICE enforcement nationwide,” McCarthy said.

Jordan said in a statement that Republicans will hold Mayorkas accountable “for his failure to enforce immigration law and secure the border through all means necessary.”

McCarthy was at the border with six other Republican members of Congress to receive “operational briefings,” his office said, and to express gratitude to border officers serving ahead of Thanksgiving.

The White House attacked McCarthy for his visit and claims about Mayorkas, with press secretary Karine Jean-Pierre calling the trip a “stunt.”

“The question that we have for Kevin McCarthy, who’s soon to be — who’s soon to be Speaker McCarthy, you know, what is — what is his plan?” Jean-Pierre said when asked about McCarthy during her daily briefing for reporters. “What is he doing to help the situation that we’re seeing? What is his plan? He goes down there and he does a political stunt, like many Republicans do, that we have seen them do, but he actually is not putting forth a plan.”

“I think the country doesn’t like impeachment used for political purposes at all,” McCarthy told Punchbowl News in an interview published Oct. 19. “If anyone ever rises to that occasion, you have to, but I think the country wants to heal and … start to see the system that actually works.”

Mayorkas told a Senate panel when asked if he was going to resign said he has no plans to do so nor has he spoken to President Joe Biden about it.

The move to threaten to impeach Mayorkas was expected, according to a Biden administration official. A Mayorkas impeachment by the GOP-led House would likely fail in the Democratic-controlled Senate because of a two-thirds vote needed for removal.

The DHS secretary has drawn the ire of Republicans on Capitol Hill as the number of migrants that crossed the border in the fiscal year 2021 was the highest on record, according to statistics released by U.S. Customs and Border Patrol.

Tuesday’s announcement from McCarthy comes as more conservative Republicans say they won’t vote for him for speaker.

McCarthy will need the backing of the majority of the House to be elected speaker on Jan. 3. Nearly all Republican members, given the slim majority, would have to vote for him.

He won the House GOP’s nomination to be speaker last week in a 188-31 vote. But so far, five House Republicans are threatening to vote against McCarthy in January when the entire House votes. GOP Reps. Matt Gaetz, Andy Biggs, Matt Rosendale, Bob Good and Ralph Norman all now have publicly said they will not support him.

Biggs said McCarthy does not have 218 votes and refuses to “assist” McCarthy in his effort to get the votes. Biggs tried to challenge McCarthy during GOP leadership elections.

“Time to make a change at the top of the House of Representatives. I cannot vote for the gentleman from California, Mr. McCarthy,” Biggs said in a statement last week.

-ABC News’ Katherine Faulders, Luke Barr and Will Steakin contributed to this report.