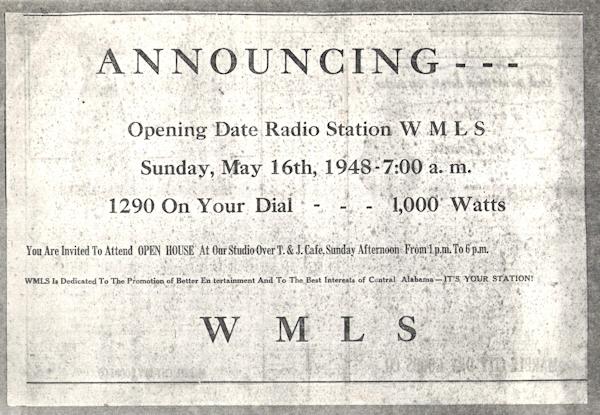 A license was granted by the Federal Communications Commission on Dec. 23, 1947, and construction began on Jan. 5, 1948. The original Raytheon RA-1000 transmitter, serial number 213, in constant use until being replaced on Jan. 28, 2012, was refurbished and is now on display at the Alabama Historical Radio Society museum in Birmingham.

Studios and offices were originally located above the T&J Café at 11½ W. Second St. in downtown Sylacauga, just behind what is now Magnolias, although the tower and transmitter were north of the city in an area with no address later known as 1 Motes Rd.

Gertrude Tyson, host of the station’s popular Friendly Neighbor program, later explained that “WMLS had its beginning as a dream in the minds of four young Sylacauga veterans. They had all been in the service during World War II, and were attending Birmingham Southern after the war. As was the case with all returned veterans, they were eager to get into something that would be profitable to them and serve their hometown as well. When they learned that a frequency was available for the 1,000 watt station, they got up a few thousand dollars between them and the dream soon became a reality.”

Marble City Media has rapidly expanded since 2012, adding new FM signals licensed to Rockford and Alexander City and acquiring an AM station in Alexander City, with primary studios and offices still located on Motes Rd. The company’s six stations reach into parts of more than 20 counties in East Central Alabama.

Marble City Media also operates SylacaugaNews.com and and has a construction permit to build another new FM station in the Auburn area.