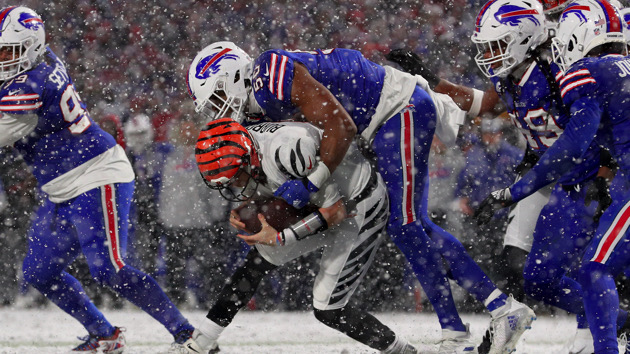 (BUFFALO, N.Y.) — The Cincinnati Bengals defeated the Buffalo Bills on Sunday during a highly anticipated rematch, which was Bills safety Damar Hamlin’s first time at the stadium after he collapsed from cardiac arrest during the teams’ regular season meeting.

“Welcome home,” the Bills tweeted along with video of Hamlin and his family at the stadium.

Hamlin collapsed suddenly after tackling Bengals wide receiver Tee Higgins on Jan. 2. He was quickly surrounded by medical personnel, who performed CPR and restarted his heart on the field before being loaded into an ambulance and taken to a nearby hospital.

While he remained on a ventilator initially, he had the breathing tube removed days after being admitted to the hospital and doctors said his neurological function remained intact.

The game was suspended and later canceled.

Hamlin was released from UC Health in Cincinnati to Buffalo General for further treatment on Jan. 9.

Hamlin was discharged from the hospital nine days after the incident and has since been recovering at home.

While Hamlin has made great strides in his recovery from a cardiac arrest event earlier this month, he still has a long way to go in his recovery, his family spokesman told ESPN on Thursday.

“Despite being out of the hospital, Damar still has a lengthy recovery. Damar still requires oxygen and is having his heart monitored regularly. He has visited with the team a few times but he still gets winded very easily. He’s upbeat and positive and ready to continue to overcome this,” Hamlin’s spokesman, Jordon Rooney said.

The Bengals won the rematch and defeated the Bills 27-10.