Forty-two years ago, a young man from Auburn, Ala. debuted in his first professional outing as a relief pitcher for the Los Angeles Dodgers in 1979. That, however, was not the beginning or end of greatness for Joe Beckwith, two-time World Series champion. 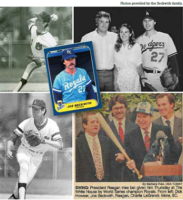 Growing up in Auburn, Joe Beckwith and his brother Bill, Jr. were known as two competitive and equally athletic brothers. That competitive spirit continued with Beckwith throughout his career.

Beckwith did not start his career as a pitcher until his junior year at Auburn High School. Instead, he played opposite the position as a catcher. David Clay recalls his stepbrother’s first real success came in an 18-inning game against Jeff Davis, where Beckwith threw the last thir- teen innings. “That is when he was first truly noticed,” stated Clay. Beckwith was a state All- Star pitcher in 1973.

After  a  successful  career  at  Auburn University, in which he was named All-SEC in 1976 and 1977, Beckwith pitched for the Los Angeles Dodgers (1979-83, 1986) and Kansas City Royals (1984-85). He was part of the 1981 and 1985 World Series Championship teams. Beckwith was inducted into the Alabama Sports Hall of Fame in 2004, becoming the first graduate of Auburn High School to be enshrined there. He also received a marker on the Auburn Tiger Trail Walk of Fame in 2006. If you are in downtown Auburn, you can visit the Tiger Trail marker in front of the Drafthouse restaurant on Magnolia Avenue. 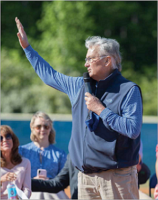 The City of Auburn recently recognized Joe Beckwith’s accomplishments by designating April 21 Joe Beckwith Day. Auburn Mayor Ron Anders proudly recalls the impact Beckwith had on the Auburn community. “He was the first player from Auburn High School to play in the Majors. He has had a great career. It is important for our City to honor him,” stated Anders. In addition, Beckwith’s alma mater, Auburn University, had a subsequent celebration marking his greatness and impact on the school’s baseball program.

Beckwith had colon cancer and succumbed to his two-and-a-half-year battle, one month after being honored by his City, High School, and University.  Close  friend  and  former Auburn Mayor Bill Ham recounted Beckwith’s last several months. “No quit in him,” said Ham. “He lived life with grit and determination, just as he played baseball.”

At the age of 66, Beckwith died on May 22, 2021. He is survived by his wife of 29 years, Lee; his children, Bailey (Will), Tyler (Kelsey), Reynolds (Drew), Allie (Christopher), and Merrill (Amy);  and  his  three grandchildren,  Prim, Foster, and Rutherford. Joe will also be forever remembered by his brother, Bill Jr. (Deborah); his stepsister, Ann (Rusty); his stepbrothers, David (Sandra) and Bill (Susan); and his cousin and second “Mama,” Pat. Joe was preceded in death by his mother, Anne; his father, Bill; his step- mother, Marjorie; and his granddaughter, Grace. 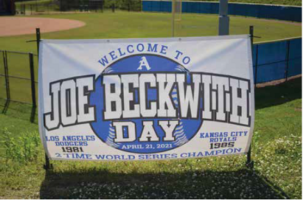 After his professional baseball career, Beckwith moved back to Auburn, a city and community he loved. He gave of his time by coaching  area  softball  and  baseball teams. In  2004,  the  Dixie Youth  baseball  team  he coached won the state title. One of Beckwith’s final  wishes  was  to  ensure  Auburn  High baseball  players  an  opportunity to  further their careers at the collegiate level. So, with the support of his family and friends, the Joe Beckwith Scholarship Fund was formed. The scholarship fund will provide one scholarship annually  to  an  Auburn  High  School  senior baseball  player.  The scholarship  fund  has reached just over fifty percent of its initial goal only two months after his death.

Bill  Ham,  who  also  serves  on  the  board  of  the  Community Foundation, says, “Beckwith’s passion and love for the sport of base- ball were evident in his success. In addition, his admiration for his community is apparent because he could have retired anywhere, but he came home. His legacy will live on through the efforts of the Joe Beckwith Scholarship Fund. His spirit will live on in the players who receive a scholarship in his name.”

Those who would like to honor the life and legacy of Joe Beckwith may contribute to the Joe Beckwith Scholarship Fund by visiting the Community Foundation of East Alabama at cfeastalabama.org.