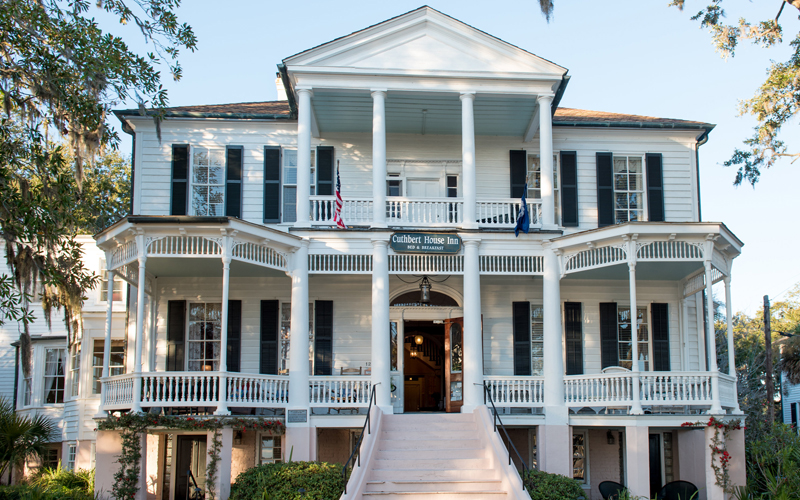 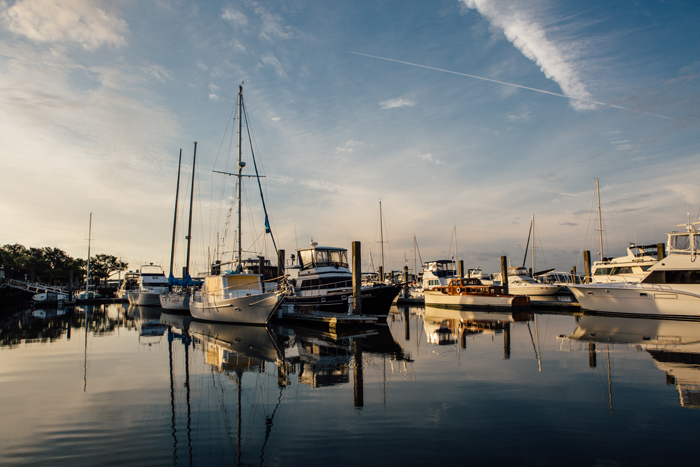 Tall palmettos and wind-swept branches of ancient live oaks twisted by time and draped with moss stand among the antebellum homes along the bay in Beaufort, S.C.  On a warm afternoon, the branches gently sway with breezes from the Beaufort River dotted with sailboats, providing a picturesque setting in one of the country’s oldest and most historic towns. The Lowcountry community has received many honors, including being named “The South’s Best Small Town” by a major publication.

Founded in 1711 by the British, Beaufort has a rich history, including ties to the Revolutionary and Civil Wars.  The second oldest city in South Carolina hosts approximately one million visitors annually. It is considered one of the most diverse of any community its size due to its historic character and architecture, while preserving the charms of yesteryear. Beaufort is home to one of the largest population of Gullahs, a culture known for preserving its African linguistic and cultural heritage.

Set between Savannah, Ga., and Charleston, S.C., Beaufort is one of the Sea Islands on the Intercoastal Waterway.  It has been the setting for over 16 movie sites downtown with others in the outlying areas, including Prince of Tides, Forrest Gump, the Big Chill and others.       Beautfort’s awards and accolades include being listed as having the top bed and breakfasts by numerous publications, including TripAdvisor’s Traveler’s Choice Awards. Cuthbert House ranked number 10 on Trivago Awards 2017 list of hotels in the “Alternative Accommodations,” and is listed in Historic Inns of Americans top 10 most romantic. 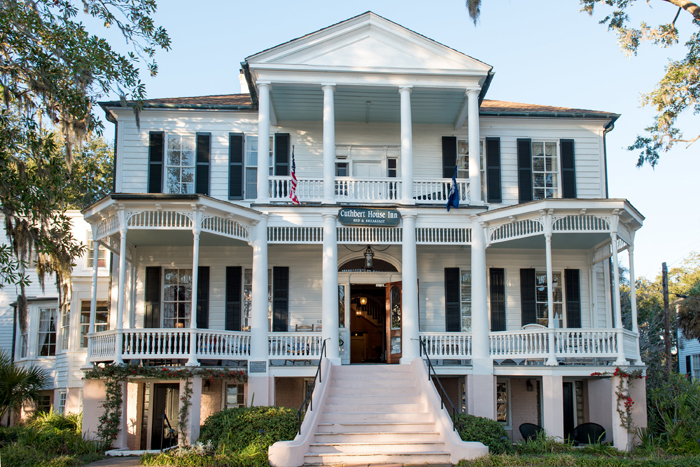 As immigrants from Scotland, the Cuthberts became prosperous plantation owners on the mainland. By 1780, the family owned land in what would become Beaufort. John Alexander Cuthbert built a grand classical home for his wife Mary between 1790 and 1810 as their summer house to escape the heat inland. The house was built at an angle to catch the breezes from the bay. While John died with others in a Yellow Fever epidemic, Mary and a daughter were living in the house when the Civil War began. They fled when Union forces invaded Beaufort in 1861. Union General Rufus Saxton, who was in charge of housing and feeding freed slaves in the Lowcountry, confiscated the house and later purchased it. Military records indicate General Tecumseh Sherman stayed in the house in January 1865 before his march through the Carolinas. A framed picture of Union troops on the steps of the house can be seen in the house today, as well as names of soldiers etched in the mantel of the fireplace in the Eastlake suite.

The inn has been well preserved over the years and offers 10 rooms and suites decorated in beautiful furnishings with fireplaces. Modern amenities include whirlpool tubs and oversized showers. A scrumptious Southern breakfast is served in the Victoria Conservatory. Coffee service is available in rooms and outside the dining room with French press coffee on tables. Our first breakfast included a pecan and brown sugar stuffed apple, and delectable eggs benedict with truffle cream over hash browns and mushrooms. A fruit cup, blueberry pancakes and sausage with Grand Marnier sauce were a great start the second day.

Near sunset, hors d’oeuvres and beverages are served on a sideboard in the parlor. The refreshments can be savored in the comfortable furnished room or on the verandah with fresh breezes from the bay.  At the end of a busy day exploring, we took our plates outdoors to unwind and linger until time for dinner. A variety of restaurants, art galleries, shops and Waterfront Park are located within walking distance. 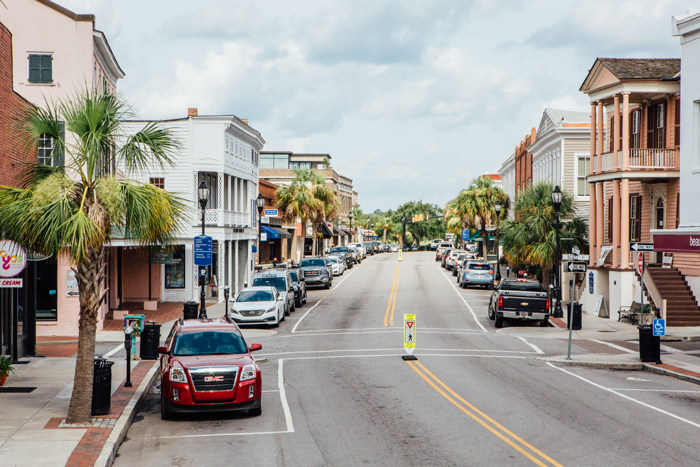 Plum’s is one of the oldest restaurants in downtown Beaufort. The current owner’s mother opened the restaurant 30 years ago with an art gallery in the front. When the son took over, he purchased the gallery and extended the restaurant space. The most popular spot to sit is outdoors overlooking the river. When we arrived at the casual, lively restaurant, the outdoor seating was full. We sat by a window to have a view of the water. As we were seated, a basket of biscuits were served alongside whipped butter with honey and pecans. We found these to be addictive.

The menu includes a good selection of starters, salads, burgers, sandwiches and chef’s specialties, which also offers a smaller serving. Wild caught fresh shrimp is available as “peel and eat” or fried in three sizes. We ordered a quarter pound fried. Beaufort has a large shrimp fishing business. The fresh shrimp were top-notch with a light, crunchy coating. We decided we would share entrees for each to sample. Two Carolina flounder fillets stuffed with crabmeat was one entree, which was flawless accompanied with grits and signature peach vinaigrette salad. Embellished with pecans, apples, tomatoes, goat cheese and cornbread croutons, the salad would be a scrumptious choice at lunch.  The other entree choice was tasty crab cakes topped with corn and sriracha aioli and served with the same sides. While the homemade desserts were tempting, we were too full (on biscuits!).

Plum’s is open for lunch and dinner. Guests at the inn dined at the sister restaurant, Saltus River Grill, and reported it was outstanding.

Located downtown, Breakwater has a more upscale setting. Upon being seated, small biscuits arrived with orange marmalade butter. Biscuits and shrimp seem to be popular. Since we knew the shrimp would be good, we ordered fried shrimp for an appetizer. We were told the recipe came from the owner’s mother. The owner of the restaurant is also one of the chefs. After trying a couple of careers, he decided to become a chef at 35 and attended culinary school.

The scallops and risotto sounded too good to miss. Perfectly seared, succulent scallops were served with creamy mushroom risotto and green beans. Our other entree was grilled striped bass, which was a special that proved to be an excellent choice. It was accompanied with crispy risotto cakes and sugar peas. Pecan pie topped with bourbon ice cream and butterscotch sauce along with chocolate cake and ice cream capped the evening on a sweet note.

After a heavy breakfast, we decided to dine light for lunch. The Lowcountry Produce was interesting with local art, its own brand of jellies and canned items along with a deli. The menu included assorted Lowcountry favorites. At our table we ordered she crab soup and the Lowcountry trio, a flavorful combination with pimento cheese, pickled okra and dilled beans. It was just the right sample with a tall glass of iced tea. 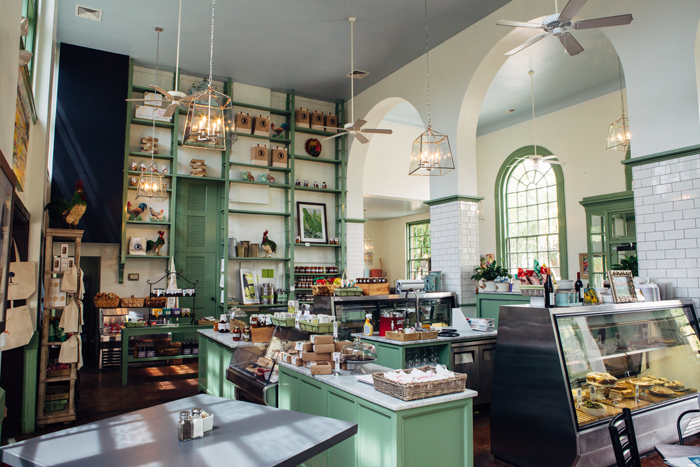 For a refreshing beverage downtown, stop by the market for a tea float. Select from assorted sorbets, including lemon, peach, mint, mango and strawberry in a glass of sweet or unsweet tea.

Beaufort Shrimp Festival
The Shrimp festival will be held Oct. 6 and 7 with the Henry C. Chambers Waterfront Park as the backdrop. Fifteen local restaurants participate and compete for the Silver Cup Award and the People’s Choice Award.  Free admission.


Fall Festival of Homes and Gardens
With an array of historic antebellum and Civil War era homes, the Fall Tour will be held Oct. 27, 28 and 29. Sponsored by the Historic Beaufort Foundation, this tour of homes is spectacular.  Call 843-379-3331 for tickets and information.

November Heritage Days at Penn Center
Held the second weekend in November, this celebration showcases the history of Penn School and the cultural legacy of the Gullah people of Sea Islands. Visitors can witness the Africanisms of basketry, storytelling, net making, hair braiding and bateau making that are a cultural legacy rooted in West Africa.


Beaufort History Museum
Relive the area’s rich history by visiting Beaufort History Museum at the historic Arsenal in downtown Beaufort. A knowledgeable docent will guide you through more than 450 years of Beaufort’s past, bringing to life the events that shaped the development of America.


Carriage Tour
Relive the glory days in a horse-drawn carriage narrated by a knowledgeable guide. Learn about the trials and adventures that Beaufort has endured and overcome over the last 300 years. For more information, visit the website at southurnrose.com or call 843.524.2900.


Sunset Harbor Tour
Captain Dick offers a sunset cruise daily as well as Captain Bryan and his wife, Chef Tara. Captain Dick is a casual atmosphere while Captain Bryan and Chef Tara offer an elegant excursion with complementary wine and hors d’oeuvres. For more information go to cruisebeaufort.com or beaufortrivertours.com.


Hunting Island Lighthouse
At 132 feet high in the sky, the Hunting Island lighthouse is the only lighthouse in South Carolina that allows access to the inside. Plaques at each landing describe the history and the mechanics behind it. Stop by the shop on your way out for a snack or a souvenir.

Soft Shell Crab Festival
Held annually in April in the Town of Port Royal, the festival celebrates the soft shell crab and includes an open street market with a variety of shopping and dining choices.

The Original Gullah Festival
The Festival is held in May during Memorial Day weekend and celebrates the African American heritage through dance, art and Gullah cuisine.

The John Mark Verdier House Museum is home of the Historic Beaufort Foundation. Admission is free. For further information call 843.379.6335.

Pat Conroy Literary Center honors the author and continues his legacy as a teacher, mentor, advocate and friend to readers and writers. The center also hosts workshops and seminars for writers and readers, a visiting writers series and special events. The Pat Conroy Literary Festival is held in Oct. For additional information visit patconroyliterarycenter.org or call 843.379.7025.

For other ideas of things to do in Beaufort, visit http://www.beaufortsc.org/50-things-to-do/.