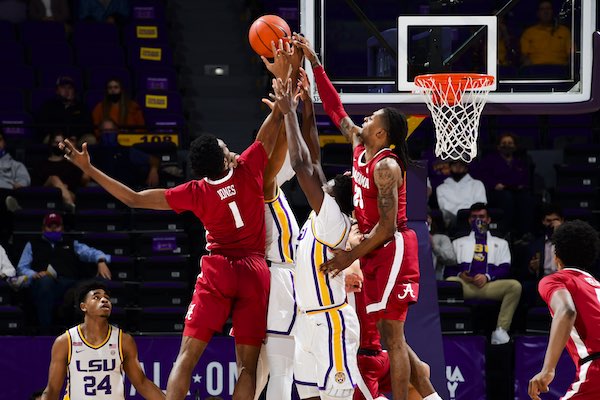 Alabama during a game against the LSU Tigers at PMAC on January 19, 2021 in Baton Rouge, Louisiana. Photo by: Gus Stark

The following is a press release from Alabama Athletics.

TUSCALOOSA, Ala. – The Alabama men’s basketball team will face three Final Four teams from a year ago to highlight a challenging 2021-22 non-conference schedule, which head coach Nate Oats announced on Tuesday. The 13-game non-conference slate consists of seven games which will be played inside Coleman Coliseum, five neutral site and one true road contest.

In addition to facing three Final Four teams, Alabama’s 13 non-league foes combined for seven conference regular season and tournament championships last season, seven postseason appearances (four NCAA and three NIT) including both the 2021 NIT and NCAA Champions, and an overall record of 226-82 (.734) and a 127-45 (.738) total mark in league play.

The Crimson Tide will open the 2021-22 regular season with a four-game homestand beginning on Nov. 9 against Louisiana Tech, the defending Conference USA West Division champions and National Invitation Tournament third-place finisher from a year ago. Alabama will then close the homestand with a trio of games in a span of a week with Summit Conference regular season champion South Dakota State (Nov. 12), South Alabama (Nov. 16) and Oakland (Nov. 19) all coming to the Capstone.

Following the homestand, Alabama will play four consecutive neutral site contests, three of which will take place in Orlando, Fla., at the ESPN Events Invitational. The Tide will open the event against Iona on Nov. 25 and will take on either Belmont or Drake on Nov. 26, with the event’s final game coming on Nov. 28.

The Crimson Tide opens the month of December playing a pair of Final Four teams. First, UA will make the more than 2,500-mile trek to Seattle, Wash., to take on national runner-up Gonzaga in the Battle in Seattle on Dec. 4. A week later, Alabama will return to the friendly confines of Coleman Coliseum for the first time in three weeks when the Tide hosts Houston.

The lone true road game on this year’s non-conference schedule will be played on Dec. 15 at Memphis, the 2021 NIT champions and a team expected to be ranked in the Preseason Top 25 this year. The Tide will then take on in-state foe Jacksonville State on Dec. 18 in Tuscaloosa, before playing Colorado State in Birmingham on Dec. 21.

The non-league slate will conclude on Jan. 29 when Alabama plays host to defending national champion Baylor in the Big 12/SEC Challenge.

The Tide’s 18-game SEC slate, along with tip times and television designations, will be announced at a later time.