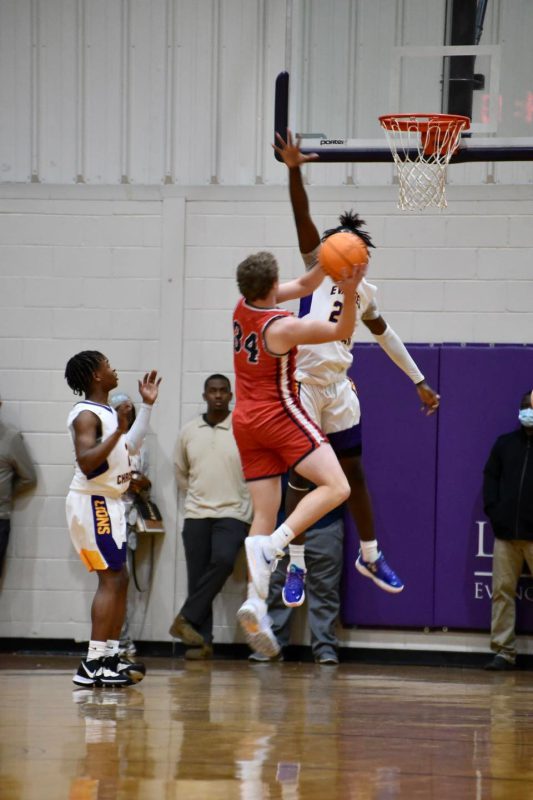 MONTGOMERY – With several players out for Lee-Scott Academy across the varsity girls and boys teams, the Warriors found a way against Evangel Christian Academy, sweeping the Lions in both varsity games to conclude a stretch of three games in four days.

The varsity girls were missing starting senior forwards Sterling Tucker and Emma Frances Zellner, looking to a young starting five that featured four sophomores and one freshman. At halftime, Lee-Scott had built an 18-13 lead, but it was Evangel who went on a 12-3 run in the third quarter to put the Warriors behind.

In the fourth quarter, Lee-Scott overcame a 32-26 deficit, taking a 36-34 lead with 50 seconds remaining off of an Ellie Keesee floater. On the next possession, Evangel dumped the ball to the post with 6-foot-3 center Zaria Johnson tying the game at 36, ultimately sending the game to overtime. It was Lee-Scott closing the game out in the extra period 46-43 to stay undefeated and advance to 7-0.

In the late stages, it was sophomore guard Madison Davis who urged the Warriors on, leading Lee-Scott with 15 points on 4-for-12 shooting. She knocked down two three-pointers in the win, adding seven steals and three rebounds to her stat line. Below is the full box score for the Warriors.

You can watch the replay of both varsity games below.

The varsity boys game saw Lee-Scott take an early lead and hold it for four quarters, winning 60-49 to improve to 5-2 on the season. Lee-Scott took a lead midway through the first quarter and never relinquished it despite runs made by Evangel in the second half.

At the break, the Warriors led Evangel 28-21, but Evangel battled in the third quarter, getting the lead down to as little as two points at different intervals in the quarter. Lee-Scott put on a convincing display in the fourth to re-establish the Warrior lead and close out the game, outscoring Evangel 22-14 in the final period.

Ten different Warriors scored in the win for Lee-Scott as the Warriors had one of their better shooting performances of the season, finishing 50 percent from the field. Junior forward Joseph Horne led the team with 18 points and 10 rebounds to collect the double-double. He added a steal and a block to his stat line as well.

The Warriors were without starting point guard Payne Weissinger with sophomore Walker Fisher getting the start. Fisher put up four points, three rebounds, three assists and one steal in the win.