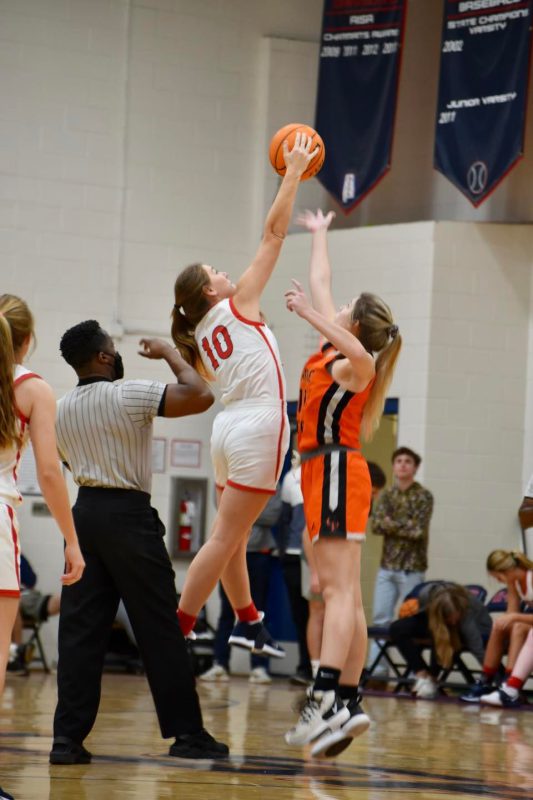 AUBURN, Ala. – Bring out the turkey and casseroles.

Lee-Scott basketball will head into the Thanksgiving break following back-to-back wins on the final day of the Lee-Scott Classic against Clarke Prep on Tuesday.

The varsity girls team started the evening’s action with a 47-40 win over the Gators. Senior forward Emma Frances Zellner led the team with 18 points. Through four games, Zellner leads the team in scoring with 20.5 points per game and rebounding with 13 rebounds per game. She had a season-high 31 points against Tuscaloosa Academy on Monday.

Six other Warriors scored in the win with the box score below.

Lee-Scott varsity girls advanced to 4-0 at the conclusion of the second week of the season. Watch the replay of both the varsity girls and boys games below as heard and seen on the Lee-Scott Sports Network presented by The Orthopaedic Clinic.

The varsity boys team responded to a gut-wrenching, overtime loss to Tuscaloosa on Monday with a 73-33 win over Clarke Prep to conclude the tournament. The Warriors shot their best field goal percentage of the season at 54 percent with 13 different players scoring in the win.

Junior forward Joseph Horne led the team with 16 points. He added four rebounds, a steal and a block to his stat line. Alex Cash scored the first seven points of the game, finishing with 11 points, eight rebounds, two assists, a steal and a block. Horne and Cash were the only two players to score in double figures.

Lee-Scott dominated Clarke Prep on the boards, outrebounding the Gators 37-16. Aggressive defense helped the Warriors to force 21 turnovers while only turning the ball over 13 times themselves. The final box score is below.