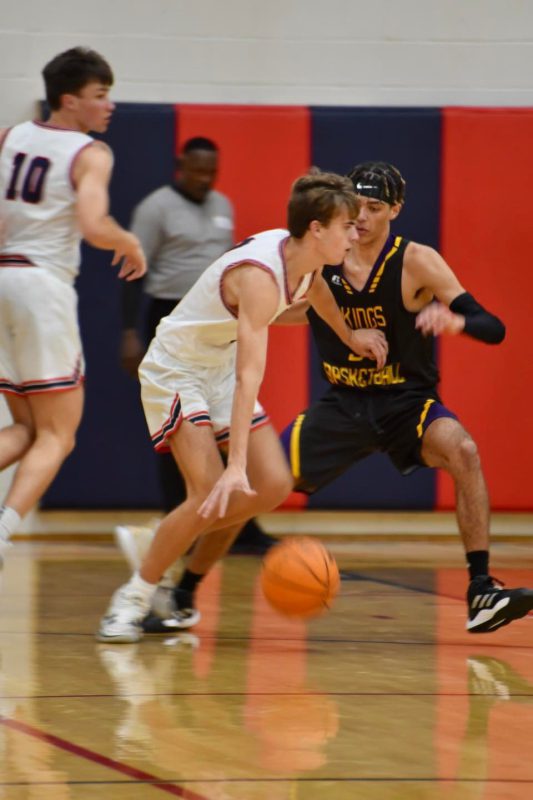 AUBURN, Ala. – In the movie Hoosiers, it is Jimmy Chitwood who hits the game-winning shot to lift Hickory to a state championship.

On Tuesday night, it was Carter Blackmon that knocked down the game-winning three from the corner to push the Lee-Scott Warriors to 1-0 with a 58-55 win over Wiregrass. Can you script it better than for Blackmon, a senior small forward, to come up clutch in the climactic conclusion of the season opener?

It may just be the first game of the season, but it was nothing short of heroic for the Warriors. Blackmon finished the night with 10 points on three 3-pointers and a free throw.

It was a back-and-forth game in the varsity boys contest with much of the Lee-Scott starting lineup getting into foul trouble early in the first half. With his starting counterparts on the bench, junior forward Joseph Horne was forced to play all 32 minutes of the game, putting up 19 points on 8-for-14 shooting with six rebounds and one assist. Wiregrass led 35-31 at the break, with Horne keeping things together for the Warriors.

With the starters rejoining the team on the floor, Lee-Scott went on a run to open the second half, outscoring the Kings 16-8 in the third quarter. Junior forward Alex Cash finished second on the team in scoring, putting up a double-double with 14 points and 12 rebounds. He added two blocks and a steal to his tally.

Wiregrass responded to the Lee-Scott run in the third, producing a tight battle in the fourth quarter. With 24 seconds remaining in the game, Wiregrass guard Christian Miller tied the game at 55 with a euro-step layup. Lee-Scott answered by getting into their half-court set and Blackmon swishing the winner with 2.1 seconds remaining. Hutch Sprayberry intercepted the inbounds pass to seal the deal for the Warriors. Below is video of the game-winning shot as seen and heard on the Lee-Scott Sports Network.

In the varsity girls game earlier in the evening, Lee-Scott trounced Wiregrass 47-18. Lee-Scott led from start to finish, holding a 27-11 lead at halftime. The Warriors dominant defense, led by three blocks and nine steals, held Wiregrass to just six points in the second half. Senior forward Sterling Tucker led the team with four of those steals, finishing with four points, 12 rebounds and three assists also on her stat line.

Senior forward Emma Frances Zellner led the team with 16 points, the only Warrior to finish in double figures. She collected 13 rebounds in her double-double performance, helping Lee-Scott to outrebound Wiregrass 59-21. Nine different Warriors scored for Lee-Scott in the win. Watch the full replay of both games below.

Both teams advanced to 1-0 with the wins, and the Warriors will be back in action on Thursday at Hooper.