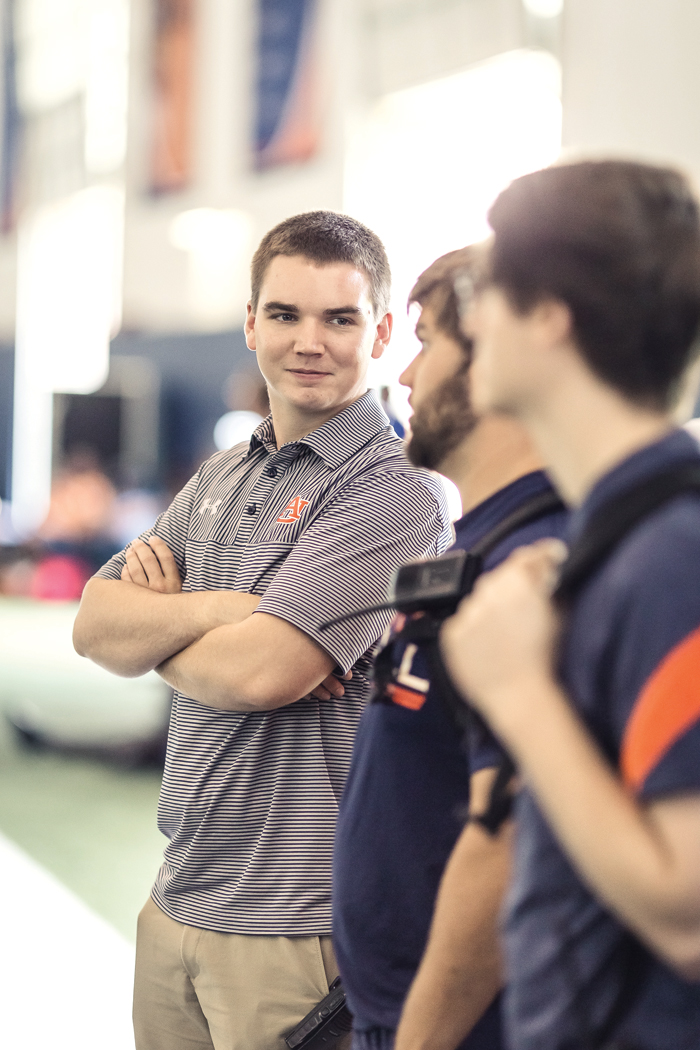 It came as a total surprise, and it happened quickly. It was the week before spring football practice began in March of 2016 when 24-year-old Bo Larkin, who had just graduated from Auburn in December 2015, was called  to head football coach Gus Malzahn’s office. The coach informed Bo of a change in the video staff. Malzahn needed the four-year student worker to lead the video team through the A-Day game.

“I was really just stunned at first, but I was also so honored that Coach Malzahn had that kind of confidence in me,” says Bo. “I was definitely willing, and because of what I had learned during my time as a student, I felt like I was up for the challenge. Looking back, it was a crazy day: I woke up that morning as one of 18 student workers and by lunchtime, I was in charge of 17 student workers. It was overwhelming, but I had a lot of support from the coaches, staff and even the players.”

Bo did, indeed, get the staff and the team through spring and then, was once again blown away when Malzahn offered the video coordinator’s position to him. The top job. Permanently. “As a student, I was given so many opportunities to learn pretty much every area of the football video production office,” says Bo. “Brent Thomas (former coordinator) made me an integral part of the program and gave me invaluable experience and networking opportunities that paid off in ways I never imagined. I will always be grateful to him for everything he taught me and has done for me.”

Now entering his second football season as the coordinator, Bo has a full staff, which includes a new, full-time assistant, Colby Borden, and 18 student workers who come from many different backgrounds and majors across campus. “Each of the students brings a different personality to the squad,” says Bo. “They are studying to be teachers, engineers, football coaches, programmers and broadcasters, but everyone has that common ground of coming to practice and doing their best to help out our football team.  We spend a lot of time together during the spring and fall, so it’s imperative that we have a good group that meshes well with each other. And we do.”

Football video, or coaches’ film, refers to the practice, game and opponent film used by coaching staffs to grade players, scout opponents and create winning strategies. The primary responsibility of the video team is to film practice and games. “Our staff is responsible for filming each practice and game, as well as adding data to each play such as down, distance, field position that lets our coaching staff drill down to what they’re looking for,” says Bo. “We then create cutups of different situations, like third and long, two minutes remaining in the game, the first play of a series, or any other scenario that helps our coaches find tendencies of our opponents.” 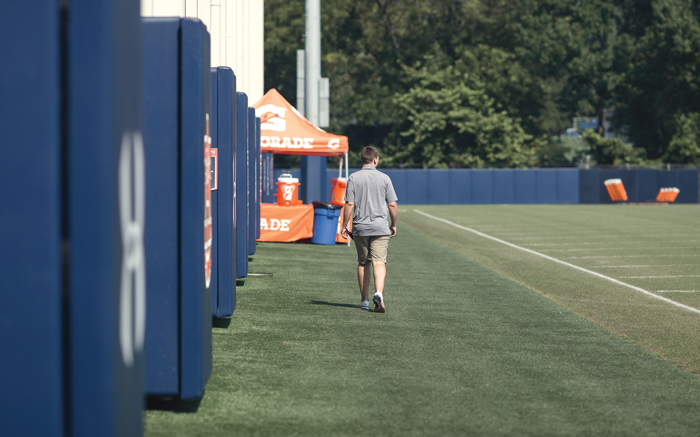 For each practice, the video team shoots from 13 locations spanning three football fields. Their shots are wide, including all 22 players on the field at any given time so coaches can see the entire field. “From the sideline cameras, coaches can see the route a receiver ran, but they can also see what everybody else was doing on the play – good or bad – wherever they were on the field,” says Bo. “The end zone cameras are much more focused on the offensive and defensive lines. Their shots are zoomed so there’s just a little wiggle room on either side of the linemen. It gives coaches a great look at the blocking schemes the offense uses and the stunts and games the defense uses to counter them.”

There are five cameras shooting sideline shots and five shooting from the sideline from towers as high as 60-foot as well as two ground cameras for an eye-level view of specific drills. This year, there is a new, 13th camera that is actually six cameras in one. “The new camera shoots 360-degree video for our virtual reality system,” says Bo. “We position it right in the action beside the quarterbacks so when they review the film later, they feel like they’re reliving the practice.” 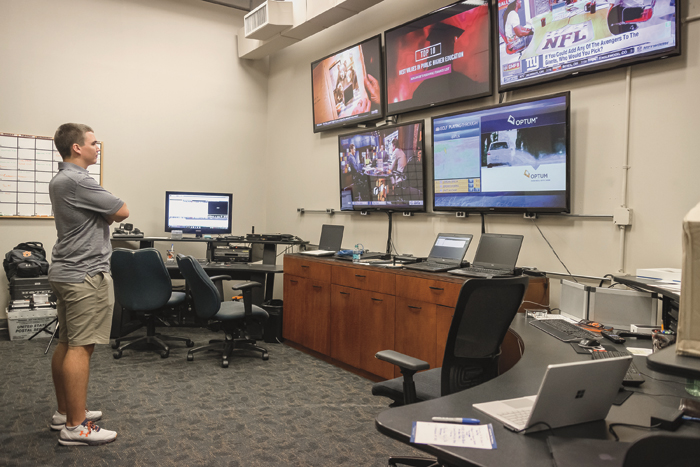 After a practice or game, the video team is tasked with getting the footage to the digital database, organizing it, and having it prepared for the coaches by the time they climb the stairs to their offices. “With practices, we start to import the film at certain checkpoints in the practice schedule so we’re not scrambling to get it all done at once,” says Bo. “We also upload our film to a cloud service so that our players have access to their practice film on their team-issued iPads as soon as 30 minutes after the final whistle. Away games are even faster paced. We have to edit the game, add data, and have the video ready for review on 10 coaches’ iPads and three laptops, all before the buses load and roll out.” 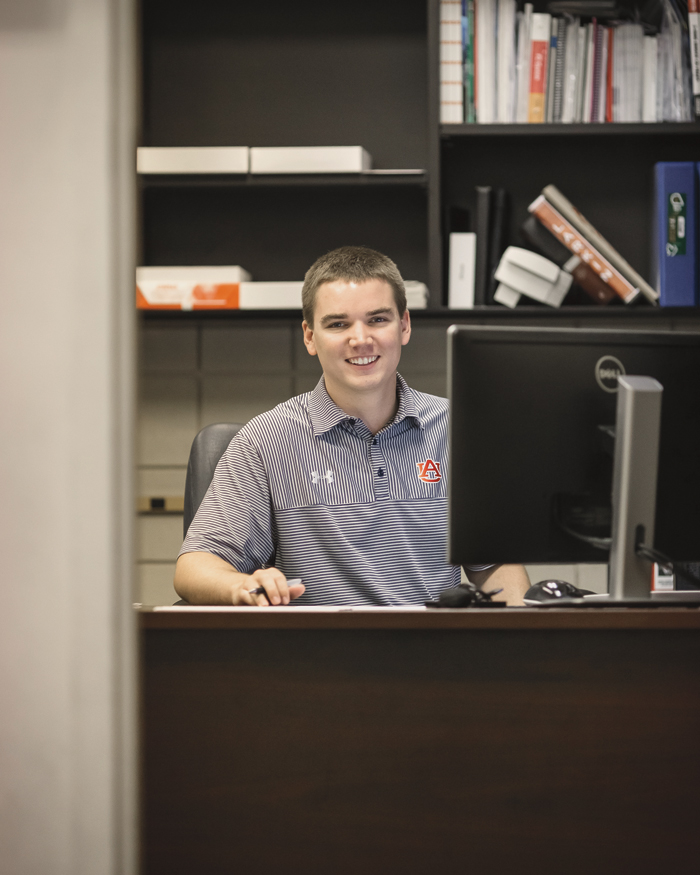 Bo and his staff manage a 60-terabyte server full of video files that are accessible to 50 computers in meeting rooms, auditoriums and offices throughout the athletic complex. The video team films and edits for 10 coaches, five analysts, four graduate assistants, a player personnel department and 105 players. “It takes all 20 of us to get everything done in the short time we have to put it all together,” says Bo. “In addition to what we already do, there are always new technologies, equipment, and techniques that could make our operation more efficient and helpful to our team. I work hard to develop and maintain good relationships in the industry and stay up to date on the newest things out there. Then, sometimes, I just have to step out and try something new for myself and see if it benefits our staff, our coaches and/or our team.”

Malzahn is happy with the chance he took on hiring such a young man for his staff. “We’re very excited to have Bo running our video department” says Malzahn. “He is a true professional with a bright future. Bo is doing a great job for the program and is off to a very good start. He has a great love and passion for Auburn, and it shows in his work.”

One misconception is that the coaches’ video staff creates the videos shown on the jumbotron at Jordan-Hare Stadium, but they do not.  “We work very closely with all staffs of War Eagle Productions and AuburnTigers.com who put all the fan-favorite videos together, but our work is much more internal,” says Bo. “A good video coordinator’s practice and game film should never be seen by the public. It’s strictly for the team’s players and coaching staff to study.”