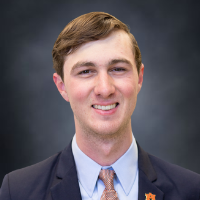 Riley Hubbard currently serves as a production assistant and technical engineer at the Auburn Network. A position he has held since August of 2016. In this role, Hubbard assists with live broadcasts, serves as an on-air co-host and substitute host, manages the Auburn Network’s automation systems, and produces on-air advertisements and imaging. Hubbard formerly served as the executive producer for Auburn High Football on Wings 94.3 and provided commentary for Auburn High Baseball on ESPN 106.7 from 2016-2018.

During his time with the Auburn Network, Hubbard has been recognized by the Alabama Broadcasters' Association on two different occasions- most recently in 2022 for his time as host of their signature program, Auburn/Opelika This Morning, which was named the best small market talk show in the state.

Hubbard is also an active member of Auburn Community Church where he serves as a volunteer on their production team and formerly as a community group facilitator. In his free time, Hubbard enjoys watching sporting events, golfing, fishing, and spending time in fellowship with friends.