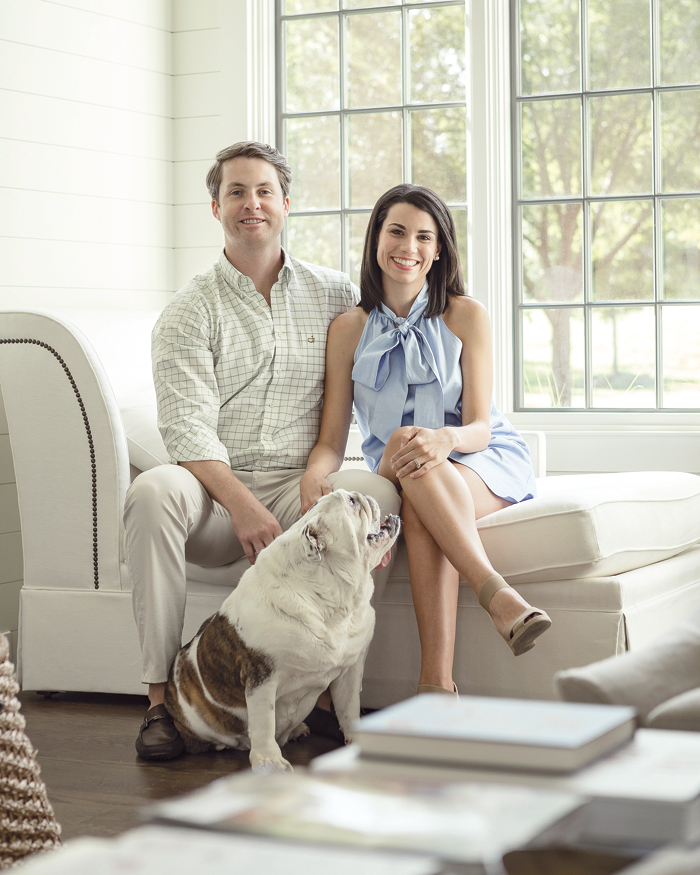 Nine years ago Melanie and Parker Duffey were sitting in their kitchen discussing his idea, as he called it a “gem of a business.” The idea was more golden than either of them could imagine. From having 50 customers the first year, Tailgate Guys has grown to hosting 40,000 at Auburn University football games alone, as well as expanding to 14 other university partners, becoming a national brand.

Melanie and Parker met at class while they were students at Auburn University. Melanie was studying design, while Parker’s major was landscape horticulture. Melanie’s father was in the military, and her family moved from Puerto Rico to Columbus, Ga., where her father served at Fort Benning when she was 5 years old. Parker was raised in Carrollton, Ga., where his family has been for generations. His mom grew up on a farm, while his father’s family had a meat processing business. “I was the black sheep of the family coming to Auburn,” he says, being one of the first to leave home to attend out-of-state college.  He graduated a year ahead of Melanie, who was studying in Italy her senior year. After graduating that summer, he visited Melanie in Italy to propose to her.

They married in 2007 in Atlanta, Ga., where her parents were living. Melanie worked as a designer at an architecture office in Columbus, while Parker was working as an assistant project manager for Allen Harris at Bailey-Harris Construction in Auburn. A year later, one of Melanie’s college friends was visiting for an Auburn football game. During that visit, Parker learned about a tailgating company at the University of Alabama called Game Day Tents. 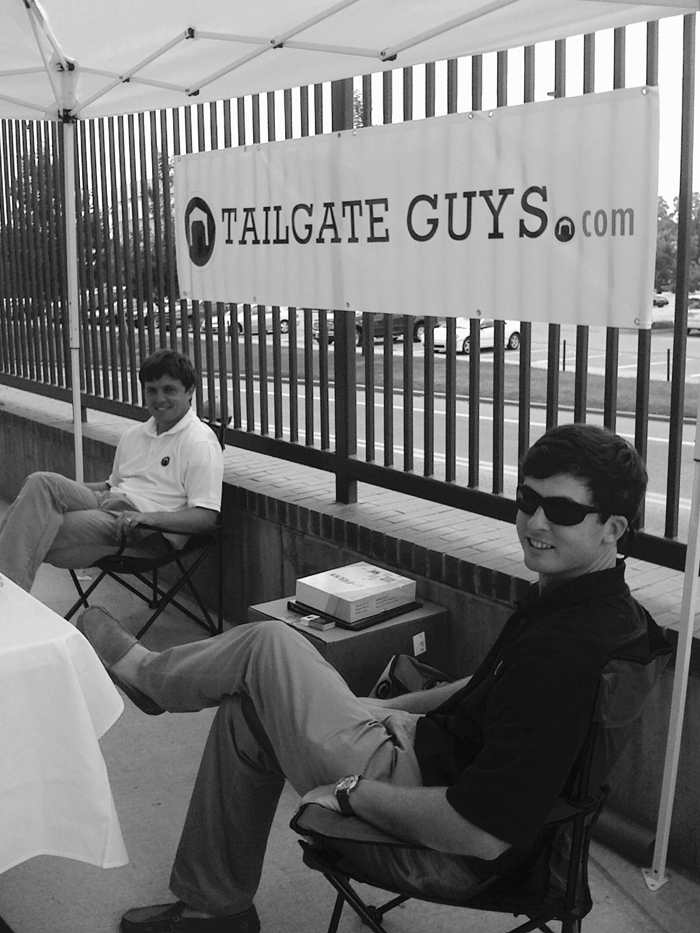 Parker thought the business was a “gem” that could be improved.  He began putting a business plan together. “I thought it could be done better and differently through a partnership with the university. The core model being partnered with institutions was our twist on it. In two weeks he finalized the plan. He reached out to a neighbor, Michael Otwell, as a business partner. As Parker considered names for the company, he decided on Tailgate Guys since he realized people would call them that anyway. He paid 800 dollars for the TailgateGuys.com domain. “That was the most I had ever spent on anything in my life,” he says.

His first call to Auburn University was about tent permitting and asking what kind of permits he needed.  “I didn’t know anyone at Auburn,” says Parker. “We bounced around to different people, ending up in front of Tim Jackson and Jeremy Roberts. At 23 years of age, I was sitting in this conference room discussing a partnership. They took a chance and supported us.” In 2009 no one had heard of a university partnering with a group for tailgating. It became national news, as the media latched onto it. The story ran on ESPN and was published in “Sports Illustrated.”

Melanie designed their website. When the first press release ran about the company on TailgateGuys.com, the site received 30,000 hits. Many were interested in renting tents, but some were not positive and had the misconception that all tailgating would be managed through Tailgate Guys, which was not the case. Parker and Melanie began staying up until 2 a.m. to answer e-mails and then were up at 5 a.m. to go to work.  Parker left his job a few weeks before football season.  For the first year in the fall of 2009, they provided tents, tables, chairs, linens and personalized signs. The second year they offered televisions and catering.

Now, Tailgate Guys hosts some 400 groups with about 75 to 100 people per tailgate. “On any SEC game,” says Parker, “we are hosting around 40,000 people, just in Auburn alone.” Auburn is now one of their 14 locations across the country.  Every year the company has grown 40 to 60 percent and expanded. “Now there are different divisions of the company,” says Parker. “We are managing parking, televisions and catering, and we have The Event Group that has been recently rebranded to PRE Event Resources.”

In 2012, Texas A&M called Parker and wanted to know if they could handle groups of a thousand or more for tailgating. At 27 years old, Parker told them that they could certainly handle it.  He went home to figure out how and stepped into handling larger groups, which would eventually evolve into The Event Group, the rental division of Tailgate Guys. In 2013, they partnered with the University of Florida, and then Georgia Tech came on board the following year. In 2014, the company formalized The Event Group as a different brand of the company. “That developed more year-round consistency for our part-time staff,” adds Parker. “We have a lot of good people in the organization and needed to keep them engaged and involved. It is also good way to for us to reinforce and expand our business model.”

In 2015 they partnered with the University of Texas and opened an Austin office, which also handles the Texas Christian University partnership in Fort Worth, TX.  At the end of 2016, they finalized a deal to acquire Game Day Tents in Tuscaloosa, the first group that inspired Parker with the idea, making Game Day Tents part of Tailgate Guys. They also purchased their rental company in Birmingham and Tuscaloosa, Special Events. At the end of December 2016, the company made another milestone decision. They took on a minority partner, Ben C. Sutton Jr., the founder of ISP, one of the largest media rights holding company for college sports, now commonly known as IMG College. Sutton sold his business to IMG for a high nine figure sum and remained president and chairman of IMG College, later selling to WME for well into a ten figure sum before leaving. “He is the Bill Gates of college sports,” says Parker. “He is on the United States Olympics Committee, the Reagan Foundation Board of Trustees, the Naismith Memorial Basketball Hall of Fame Board of Trustees, the National Football Foundation Hall of Fame inductee and board member and is a trustee at Wake Forest University, his alma mater.” 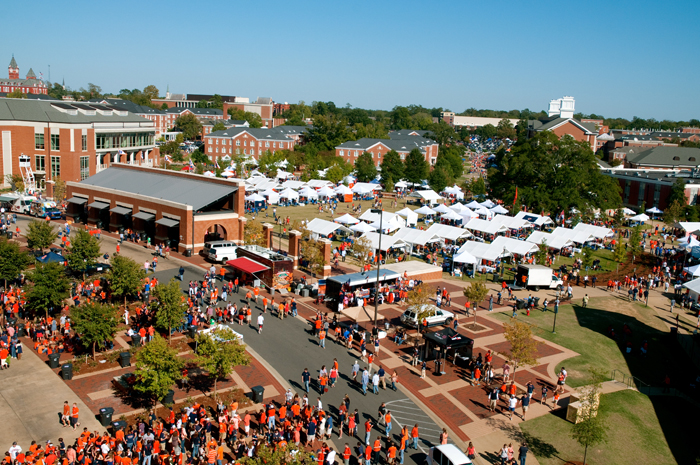 Parker met Sutton randomly at baggage claim in the San Francisco airport. “I recognized him,” he says, “and started talking to him. We both don’t think there are coincidences in life. There are too many things about our business to be coincidences. We know there is a higher power steering our lives.” “Sutton has been helpful in coaching me to advance our business,” adds Parker. “Tailgate Guys is turning into a national brand, and he has the experience of building a national brand. He has been instrumental in providing our company with relationships that would have otherwise taken me years to cultivate.”

This year, Tailgate Guys has added partnerships that include: Penn State University, University of North Carolina, University of Connecticut, the University of South Florida, University of Oklahoma, Virginia Tech and Wake Forest University. Additionally this year, The Event Group and Special Events, the year-round rental division of Tailgate Guys will launch a new brand, PRE Sports and Hospitality. The rental division will be known as PRE Event Resources. PRE will provide tents, tables, linens, china, staging, lighting, climate control and other rental needs for large-scale events. They are also working with the PGA for large-scale golf events, and have worked with the Barbasol Championship locally hosted at Robert Trent Jones, with other tournaments in their future trajectory.

In order to support this level of growth, a few key recent hires have been critical to the company’s success. Clay Jones is the new CFO, and the new COO is Chip Howard, who moved to Auburn from Gainesville, Fla., in July after serving 28 years as the executive associate athletic director for the University of Florida Athletic Association. Jones and Howard will work along side Parker to help reinforce and bolster the company’s internal operations. The company now has 70 full-time employees and employs over 300 during football season. 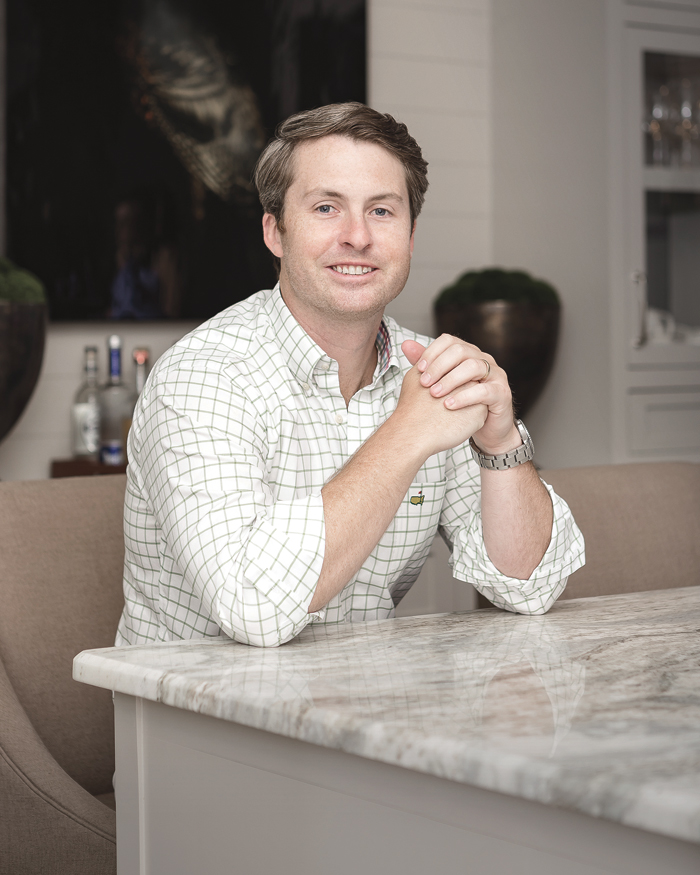 At the end of football season, Parker and Melanie will welcome their first child in November. Melanie is an assistant professor at Auburn University and involved in many community boards. “It has been amazing to look at what God has done through this business,” says Melanie, as she thinks back to the day they were in the kitchen dreaming big.

The Duffeys feel they owe their success to their employees and the support of Auburn University and the community. “We started here,” Parker says. “It would not have happened without Auburn University and our first clients. “I always thought we could take it to a larger scale, but our goals now are so far from what we ever comprehended. I think by this time next year, we will be one of the most recognized brands in college sports. It is something we could have never wrapped our minds around.    “We are just scratching the surface. I had big plans and said one day we will be doing the Olympics, and I think we will. “It has been a team effort and will continue to be a team effort,” adds Parker. “We are not stopping.”