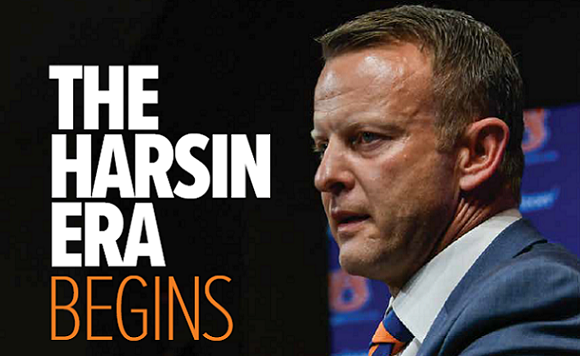 Fall brings the excitement of football, tailgating, and tradition to the South, especially the SEC. Auburn fans have even more to be excited about this season: a new era, the Harsin era. Coach Bryan Harsin was hired as the Auburn Tigers’ 27th head football coach on Dec. 22, 2020.

Harsin began his coaching career in 2000 at Eastern Oregon University as a part-time assistant. A young and eager coach, Harsin simultaneously  worked multiple jobs  from UPS to construction to reach his goals. In 2001, he knew he wanted to further his opportuni- ties, so he returned to his alma mater, Boise State  University,  as  a  graduate  assistant. In 2002, Harsin was hired as the tight ends coach, and his next break came in 2006 when he  moved  up  to  offensive coordinator  and quarterbacks coach for the Broncos.

Along his journey, Harsin has been accompanied by his true love, his wife, Kes. Harsin and Kes began their relationship as sweethearts at Hillside Junior High School in Boise, Idaho. The inseparable duo’s lives tracked alongside each other through high school and college at Boise State. Kes was a cheerleader for seven years, both in high school and college, yet her favorite team to cheer for is her family. 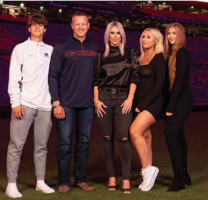 The Harsins have three children, daughter Devyn (the oldest), daughter Dayn (the middle child), and son Davis (the youngest).You may wonder if there is a family connection to the Harsin children’s names, starting with a D. Technically, there is none. Kes comes from a family whose names begin with a K or a C, the /k/ sound. When they learned Kes was pregnant with their first child, they both loved the name Devyn, so boy or girl, they knew what the name would be. However, when baby number two was on her way, they had not decided on a name until one evening when they were watching the Heisman award show. Ron Dayne won the 1999 Heisman trophy, and when it was announced, Kes glanced around the corner at Harsin, and she yelled out, “Dayn!”.

News of their third child ensured they had to stick with a name that began with a D. Davis, their third child, is the last name of a former, dear neighbor. So, though they aren’t family names, they did stick with Kes’ family tradition of naming children, all starting with the same letter or sound. That tradition followed suit on the naming  of  their  four-legged  family members. The  Harsins  have  two  dogs,  Jagger  and Jersey, Schnauser and Snoodle. But, as self- proclaimed dog people, they also have two Persian cats, Opal and Olive.

As  a  result  of  Harsin’s  accomplishments as a coordinator for the Broncos, two power- house teams came calling, the LSU Tigers and the Texas Longhorns. While on their visit to Austin, Texas, Harsin recalls touring the stadium and looking over at Kes, who was on the 50-yard line with then-head coach Mack Brown waving ‘Hook ‘em Horns.’

“When I saw Kes mid-field hugging Mack, giving me the ‘Hook ‘em Horns,’ I knew we were coming to Texas,” states Harsin. Kes and Harsin have made all life decisions as a team. In 2013, Harsin accepted his first head coaching position with Arkansas State. Between the stint at Texas and Arkansas State, the Harsins developed a love for the South. 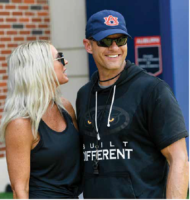 What would be perceived as the pinnacle of his dreams, Harsin returned to Boise State as the head coach in 2013. Harsin replaced his long-time mentor, Chris Petersen. Timing and success brought the Harsins back to Boise. Family in tow, the Harsins were welcomed back to Bronco Nation with open arms. The family didn’t miss a step being back in Boise. Kes launched a clothing line with HER Spirit Wear, a line of apparel that reflected the passion for the Bronco Nation. Kes stated she loved providing styles that worked for all body types. “I wanted to design and give back. It was fun being creative and supporting women,” says Kes. Proceeds from her highly anticipated collection supported Boise State academics and athletics.

Seven years leading a successful program at Boise State placed Harsin on the national radar. But, just three months after they finished building their dream home in Eagle, Idaho, the Harsins had a decision to make. Harsin and Kes were living their dream and had no rea- son to leave their home state until they were approached by one of the best programs in the SEC, Auburn University. Kes recalls standing in the kitchen with her daughter Dayn when the call came from Auburn’s Athletic Director Allen Greene. “Before we even discussed it, I knew. We grabbed each other, and I said we’re moving.” Once again, Kes knew the best choice for her husband’s career and their family was to return south.

Harsin states, “We were happy, we had everything we thought we ever wanted, but I believe that when you really focus on what you’re doing, and you’re all in, other opportu- nities will present themselves. I had met Allen before when he was at Buffalo, and when he called, well, it’s Auburn, it’s the SEC. I had to accept.” He continues, “Auburn is the best. In our family, we strive to be the best.”Kes adds, “Even our family group text is named “Best Family Ever!’” 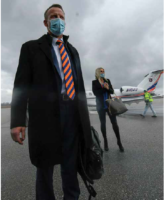 Iconic photos of Harsin and Kes stepping off a plane at the Auburn University Regional Airport flooded social media. Auburn fans were immediately intrigued by the couple. It was clear their heart and passion for one another would spill over into the football program and the Auburn community.

The Harsins moved to Auburn in stages. First,  Harsin  and  his  son  Davis  arrived  so Davis could attend Auburn Jr. High School and participate  in  the  high  school  football  pro- gram. Davis will dress out as an Auburn High Tiger  this  season  as  a  quarterback.  Harsin himself  played  quarterback, was  a  quarter- backs coach, and is now looking to determine the  starting  quarterback  for  Auburn’s  football program. Asked if he is coaching Davis through his journey as a quarterback, Harsin says, “Davis is striving for his own goals. We don’t always talk football, but I’m here if he has questions, and he does from time to time. I’m not obsessed with him and football like people probably think. My sentiment is the same as I feel as a coach for my players. I hope he is surrounded by good coaches and has a good experience that will better him. If he’s good enough, he’ll play. I always tell him that if you’re the best at your position, you’ll play.”

Second, Kes  and  Dayn  arrived  in Auburn at the beginning of the summer. Dayn was enrolled at Boise State as a freshman but has transferred to Auburn and will start classes on the Auburn campus this fall. Harsin states, “All our kids love football. She wanted to be here for the full experience and to support us. It would be strange not to have them here with us from August through January. Plus, Auburn is a brand. You know Auburn everywhere you go. A degree from Auburn University (one of the best schools in the nation) will take her far.” Finally, Harsin’s oldest, Devyn, a licensed esthetician, moved to Auburn a few months later. Kes is a proud mom and bragged about Devyn’s talents, “She works wonders on brows and with make-up. She already has some great opportunities lined up for her business here.”

The Harsins enjoy being in the same place at the same time. They have a love of boating, camping, and traveling as a family. Kes recalls that boating was the one constant for the kids growing up. “Being on the water is what we know,” states Kes. Another favorite thing to do for the Harsins is to explore new places. Family vacations include traveling to Kauai, Maui,  Mexico,  Costa  Rica,  and  Turks  and Caicos, among others. Traveling is their way of creating family memories. Kes said, “Being in Auburn, we are close to the mountains, the lake, and the beach. It will be fun to explore the area together and create new memories.” 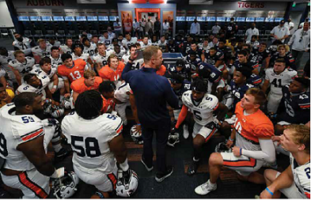 When asked how the Harsins are settling into their role as Auburn football’s first family, Harsin says, “We liked the idea of a smaller community,  and  Auburn  has  exceeded  our expectation from the people, the community, the environment, and the University. There have  been  many  changes  in  the  last  eight months at Auburn University, especially in the football program. The 230 plus football family, including the coaches and staff, are adjusting positively. The people in this town are why.”

Kes  adds, “When  we  were  at Texas  and Arkansas State, we fell in love with the South, its people. Our experiences there were one of the reasons we knew we wanted to be back in the South.”

Harsin has already made an impact on the community off the field. Over the spring and summer, Harsin  attended  Storybook  Farm’s Derby  Day  and  the  Boys  and  Girls  Club  of Greater  Lee  County’s  Great  Futures  Gala, where he was a keynote speaker. The Harsins believe  in  giving  back  to  their  community. In  Boise, the  Harsins  spearheaded  an  anti- bullying  campaign  and  were  involved  with the Make-a-Wish Foundation. Harsin and Kes are eager to support the Auburn community where there is a need. 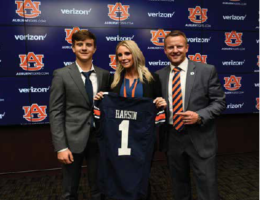 Kes is known for touting, “Be of Good Cheer!” This mantra was embedded in her at an early age by her grandmother, Olive (the name given to  one  of  their  Persian  cats). “My  grandma would always say, ‘Be of Good Cheer!’ espe- cially when there was pain and during hard times. I was very close to her. She was a widow of four children at the age of 31. She knew heartache yet was able to find joy in every situation. We all experience trials, and I lean on her words to find the positive. I have car- ried that with me, and it is how I live each day,” says Kes. A sign with the motto made by a good friend was the first thing they hung in their new home. Likewise, it is how she supports the Auburn football family.

Known as Mama Bear by her best friends, Kes is now Mama Tiger. Her protective nature and encouraging attitude are there to cheer them on and to lift them. We will no doubt hear her exclaim, “Be of Good Cheer!” Auburn  is  a  powerhouse  program  in  the SEC, undeniably the best conference in the nation. The program is full of time-honored traditions. Harsin and Kes are ready to experi- ence the first of many, including Tiger Walk, the eagle flight, the roar of fans at Jordan-Hare Stadium, and the sway of the crowd that even the players can feel on the field.

“I can’t wait to roll Toomer’s Corner,” says Kes. “My  players  say,  ‘Coach,  just  wait, you won’t believe it!’ My coaches are ready. We are ready,” states Harsin, with Kes concurring. Harsin hasn’t yet coached his first game in Auburn, but he and Kes are already winning. Their steadfast and generous spirit is cut from the same cloth as those who cite the Auburn Creed. They believe in work, hard work. They believe  in  education,  truthfulness,  a  sound mind, obedience, and mutual helpfulness that brings happiness to all. They are family. They are now Auburn. When you meet them, they will greet you with a resounding “War Eagle!” followed by a “Be of Good Cheer!”