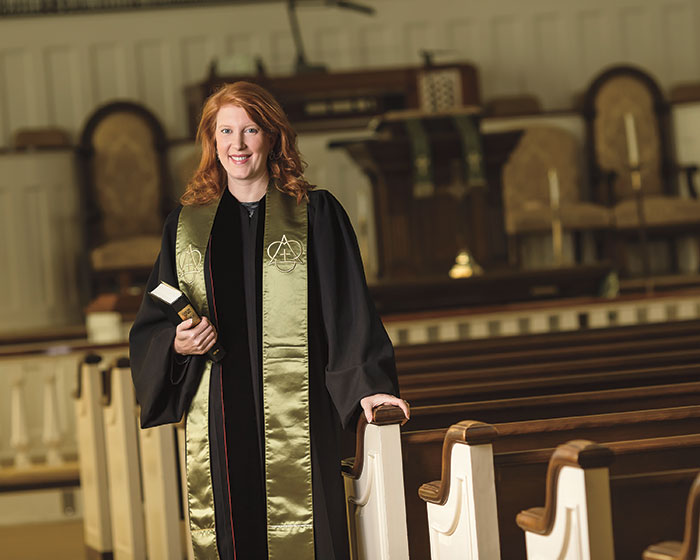 When Bishop David Graves of the Alabama West Florida Conference of the United Methodist Church began his painstaking duty of moving ministers within his conference, he knew he had to fill the vacancy left at First United Methodist Church in Opelika following the retirement of Rev. Randy Woodham. So, the bishop made a call to retired minister Rev. Tim Thompson, who served two stints at FUMC, to ask his opinion about sending a female senior pastor to FUMC.

“I told the bishop I thought Opelika would be perfectly fine with that,” says Thompson. “But deep down, I really hoped the female pastor he would send would be Rev. Robin Wilson because I knew, without a doubt, the congregation would love her.”

Ultimately, the bishop did send Wilson, who along with her husband, Rev. Jeff Wilson, and their three children, made the move to Opelika. And Tim was right. The congregation of FUMC does love her. I mean, like, they really love her.

With her arrival, Wilson became the first female pastor (senior or otherwise) at FUMC Opelika and the first female senior pastor of a large church in Lee County, even though neither of those two attributes will ever appear on her resume.

Never one to back down from a challenge or feel insecure or inadequate in her chosen profession, Wilson understands she is a trail blazer. She accepts that, but to her, it is all about ministry, not gender.

“I’ve never made a big deal about being a female pastor or about being the first woman pastor at any church I’ve served,” says Wilson. “I know people are reluctant to change, and sometimes they ‘think’ they are going to have an issue with me, but then we get to know each other, and everything works out just fine. At this point in my career, I’m not only used to being the first, or at least among the first, female pastors in a church, but I’m also very comfortable with it. I find it pretty easy to diffuse situations with authenticity – and humor. I am who I am and so far, it hasn’t taken people very long to totally embrace my leadership.”

Judge Russell Bush, who serves at the head of the staff parish relations committee at FUMC says the bishop asked the committee to create a profile of the perfect pastor for the church.

“We had things on our list like ‘enthusiastic,’ ‘visionary,’ ‘strong leader,’ ‘still at the age of raising a family’ and other similar traits we thought we needed for our congregation to thrive,” says Bush. “FUMC has had the pleasure of hearing Robin several times over the years, but at the time we made our list, we had no idea she was even a possibility to move, so she wasn’t on it. When the call came, I was totally caught off-guard, but beyond thrilled. Robin meets and far exceeds every criterion we submitted to the bishop.”

Born and raised in Prattville, Wilson graduated from the LAMP program in Montgomery where just this year, she was inducted into the LAMP Hall of Fame. She earned her undergraduate degree in communication studies at Vanderbilt University, where she and her debate partner won the SEC championship and placed third in national competition. She was involved in the Vanderbilt Concert choir, served in a leadership role for Alpha Delta Pi social sorority, worked for the school newspaper and was the business manager for the humor magazine, Slightly Amusing. But Wilson spent her summers working in church-related settings, already feeling the call into ministry.

After graduation from Vandy, Wilson earned her Master of Divinity from Duke Divinity School, where she chaired the community life committee and was chosen by her classmates to be one of only two students to lead the baccalaureate service prior to commencement.

Wilson’s enthusiastic and spirited personality has made her a sought-after preacher, spiritual guide, and retreat leader throughout the Southeast and a popular choice to lead churches in the conference. She has served on and led committees, served two terms as a trustee of Birmingham Southern University and has published an advent devotional book, God is With Us (Abington Press).

Wilson has served the Methodist church in England, Montgomery, Union Springs and Mobile before moving to FUMC in June. She and her husband have served some churches as co-pastors, but this appointment is all Wilson’s as her husband serves as the district superintendent of the Mobile district of the United Methodist Church.

The Wilsons came to Opelika from Mobile where they had served for seven years before making the move to Opelika, an especially big move for their children, Rebecca, Eleanor and Nolen.

“Anytime you make a pastoral move, there is excitement, but there is also a lot of anxiety,” says Wilson. “You are leaving a church family you have grown to love to go to parts unknown, but knowing full well you will love your new church family too. Sometimes, it’s harder to convince your children of that. Mobile is pretty much all they’ve ever known, but it has been a good move for us as a family and for the most part, everybody is adjusting well.”

Wilson has been most impressed with her new flock. Not just their jobs and families and hobbies, but with their heart for missions and helping their fellow man.

“First Methodist does so many things so well, but I am especially proud of the way this church family reaches out to help others in our community, our state, our country and around the world,” says Wilson. “Members reached out to Opelika City Schools to ask what they needed from the church and from those conversations, we began CAMP, which is an afterschool tutoring program for underserved children in the system. We also have a viable prison ministry making a difference in the lives of those who have made mistakes and are paying the consequences, but who need to know how much the Lord loves and forgives. We pack backpacks with food (through the East Alabama Food Bank) to be discreetly distributed to children with food insecurities. We send mission teams to the Henderson Settlement in Kentucky and to Orphanage Emmanuel in Honduras. We invite people to worship with us on Sundays and Wednesdays and to become an integral part of this congregation, our church family. It’s all very exciting and heartwarming, and I’m very proud and humbled to be a part of all of it.”

Wilson says she has a strong foundation to lead FUMC forward, to expound on successful programs already in place, and to find even more ways to be the hands and feet of Jesus.

“My mission field is the people of this church,” says Wilson. “And my duty to my mission is to help each and every one of them on their Christian journey; to meet them where they are and lead them. I am also here to help them find ways to share Christian love with others.”

So for Wilson, it has never been about being the “first” female pastor at a church. Or the first female to do this or that; to her, it is just about leading God’s people.

“I was called into the ministry, and I have never really worried about whether a church is going to ‘like’ having a female pastor. I’m here to do what needs to be done, love on the congregation, work together to make our community and our world a better place, and to make lifetime followers of Jesus Christ. All of that is just an extension and an expression of who I am.