“Welcomed, valued, respected, engaged” These four words have been the driving force for Dr. Chris Roberts and his leadership style while serving as the former dean of the Samuel Ginn College of Engineering. As the newly appointed president of Auburn University, Roberts plans to carry these values throughout the university system. 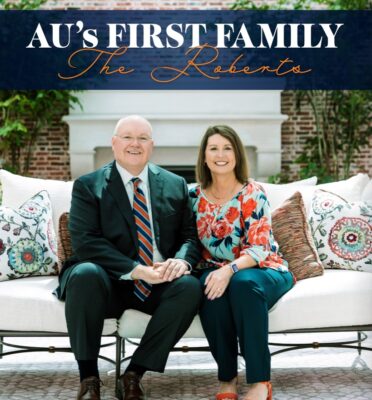 While the Roberts have their private quarters within the president’s home, they graciously gave us a tour of the public side. They desire to continue the traditions of former Auburn University President Jay Gogue and his wife Susie by hosting various groups and individuals. In addition, they see it as a gathering place to celebrate Auburn’s successes and a beacon to promote the University to alums and potential donors.

The Roberts met in 1997 while Tracy was in town to assist with a friend’s wedding. The chance encounter left a great impression on Roberts as he still carries the original piece of paper with her phone number in his wallet. The Roberts settled in Auburn and have enjoyed raising their two children here.

Roberts grew up in Ste. Genevieve, Mo., which has the distinction of being the oldest permanent European settlement west of the Mississippi. Before attending the University of Missouri, where he earned a bachelor’s degree in chemical engineering, Roberts began his collegiate experience at Southeast Missouri State, a community college. He earned master’s and doctoral degrees in chemical engineering from the University of Notre Dame. In 1994, he began his career at Auburn as an assistant professor in the Department of Chemical Engineering and became department chair in 2003. He was named dean of Engineering in July 2012.

Tracy grew up in Indiana and served in the Air Force. She lived in the Huntsville area before moving to Auburn. “The Air Force allowed me to see the world,” she says.

Roberts had not traveled internationally before the two wed. Their first overseas trip together was to France. They visited Sainte Chappelle, an ancient church that boasts one of the world’s most extensive collections of medieval stained glass. Roberts recalls, “During my time at Notre Dame, I would visit the Basilica and marvel at the stained glass collection. So when I had the chance to see the same type of glass collection at Sainte Chappelle, it was a definite stop for me.” The two enjoy visiting various countries. While international travel is Tracy’s first love, she is also committed to visiting all fifty states.

Each of them relies upon these early experiences and opportunities to drive the mission and their vision for Auburn University. 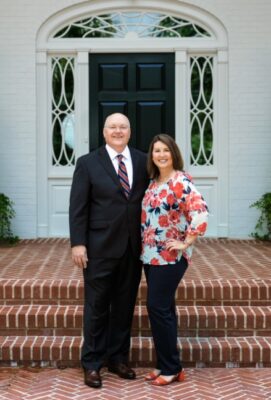 The Roberts set up an endowed scholarship to support students seeking a degree in engineering or a veteran returning to continue their education. They believe in providing the resources and opportunities for students who may not otherwise have access. One of Tracy’s initiatives will be to work with the Auburn University Veterans Resource Center to ensure veterans and their families are set up for success in their chosen career paths. She says, “Many veterans return to school with their families. However, people don’t realize that there are more expenses associated with the endeavor than just tuition.”

The couple is community-minded and has a heart for service. Tracy was heavily involved in their children’s school activities and was touted as the “go-to” parent. She is also a member of the Lee County Youth Development Board and looks forward to her work with veterans on campus. In addition to his many official duties, Roberts serves on the Industrial Development Board for the City of Auburn. In their new roles as AU’s First Family, they can “leverage their heft to improve people’s lives.”

The Roberts lean on strong community relationships to further the town and gown experience. In the first week of his presidency, Roberts had individual breakfast meetings with City of Auburn Mayor Ron Anders and City of Opelika Mayor Gary Fuller. “Students continue their university experience when they leave campus and are in the community. Additionally, those in the community extend their experience while on campus whether attending a sporting event, performing arts, or activity at the museum,” states Roberts. He emphasized that the continuum is seamless. “I see the remarkable relationship with Auburn and Opelika as a real gem I will carefully nurture as we go forward.”

Borrowing from the Auburn Creed, the line, “I believe in education, which gives me the knowledge to work wisely and trains my mind and my hands to work skillfully,” Roberts emphasizes his reliance on these words by stating, “I want each student to know they can achieve greatness through hard work and opportunity.

“My time on the Industrial Development Board has opened my eyes to the University’s role in economic development throughout the state. Auburn University is a land-grant university responsible to every county in the state.” He mentions the research facilities in Huntsville, Birmingham, and Mobile. “We want talented students to graduate and remain in the state.” 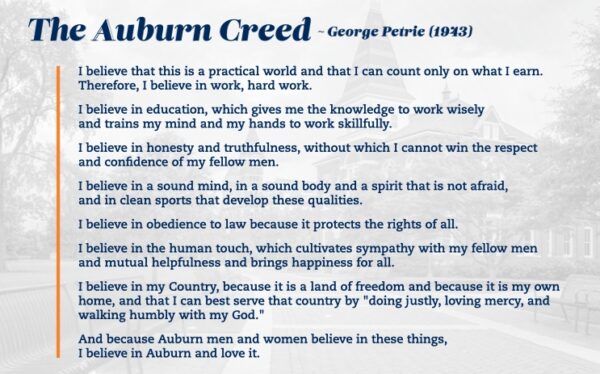 When asked what keeps the couple up at night, Roberts responds, “First, I want to say that Tracy has an amazing sense of calm that our family draws strength (from).” Tracy adds that her belief is not to worry until you have to deal with it. However, Roberts does have a constant thought about how to provide access and opportunity for students and faculty at Auburn University, knowing that AU has developed a brilliant reputation. Maintaining quality while demand is high by balancing AU’s prowess with opportunity and access for students is top of Roberts’ mind.

The Roberts strive to sustain and grow Auburn University’s reputation, brand, and student experience in a meaningful way.

Roberts’ three priorities provide the impetus for driving greatness at Auburn University. First, an exceptional student experience married with meaningful work that improves people’s lives to finally create a culture of excellence and innovation. Roberts expects to continue to draw strength from these values, and the values stated in the Auburn creed for Auburn’s “tremendous potential for greatness.” And in his own words, “I believe we do it in spades.”

So, look for the Roberts to welcome the community into their new home this fall. I am confident by then, they will know which key unlocks the front door. War Eagle!