In a peaceful setting that brings life to many of her paintings, artist Barbara Keel is surrounded by fields with streams reflecting sunlight and dirt roads carved through dense woods, home to the wildlife in many of her award-winning works. The wildlife and animal portrait artist was the first woman to paint a duck stamp painting and to win the contest in Alabama, leading her to the International Wildlife Art Competitions.

Barbara grew up in Opelika and had a few artist friends in elementary school that also became well known for their art, including Greg Brown. They competed in the window painting contest at Halloween in downtown Opelika and other art contests. Some years she won, and at other times friends placed first on their journey in the world of art. 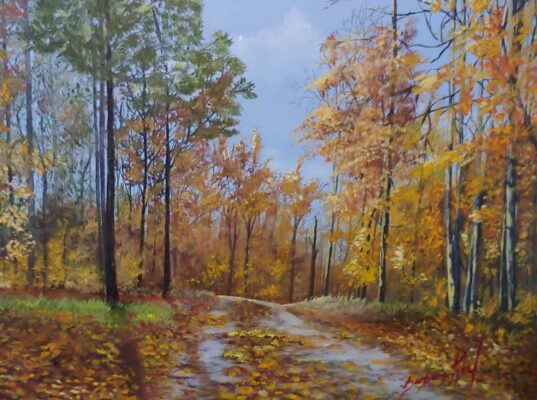 During her childhood, Barbara was often outdoors drawing pictures of her dogs or horse. In high school, she was a loner, preferring to spend her time drawing or writing.

Barbara attended Auburn University to major in art. While her art was realism, the instructor, who preferred abstract art, told her she had no talent and no chance of ever being an artist. She was so discouraged that she gave up art.

Barbara had mostly drawn in pencil or pen and ink until her mother-in-law gave her a set of pastels for a Christmas gift when she was 20 years old. “When I got the pastels,” she says, “it triggered something in me that I wanted to start working on my art again.”

A few years later she began working for Colonel Tom Immler at a frame shop in Auburn. “I walked in his shop and saw paintings of tigers,” she remembers. “I realized then that I wanted to paint animals for the rest of my life. That is where it started, working in the frame shop and going to art shows.”

At the International Wildlife Art Show, Barbara won first place for her painting of grey foxes and a tiger. “That gave it to me. There was no doubt where my life was going. From that point I have not looked back.”

Barbara and her family began traveling to zoos on weekends. She took photos of animals as well as sketching some animals while there. At some zoos, she would have an art show. At the Southeastern Art Show in Atlanta, Barbara exhibited her paintings four years in a row and received awards.

Her four children enjoyed the trips across the country. Sometimes Barbara would have her daughter run back and forth in front of cages to get the animals’ attention. This activity would provide more facial expressions from the animals for her painting.

In 1979, Barbara painted Alabama’s first Duck Stamp and became the first woman in history to paint a stamp for the contest. For years, nearly every state had a duck stamp contest, but since stamps have gone digital, Alabama no longer has a contest, except for children.

Two of Barbara’s young students in her art classes have won the Junior Duck Stamp Contest. She teaches a small group of 10 to 12 students aged 5 to 18.  One of her students won best of show for the state of Alabama, and another student in Mississippi received Best of Show for that state’s contest.

While Barbara’s children don’t have passion for painting, her 5- year-old grandson has expressed an interest and won first in his age category in the Junior Duck Stamp Contest. Four of her seven grandchildren enjoy painting and drawing. 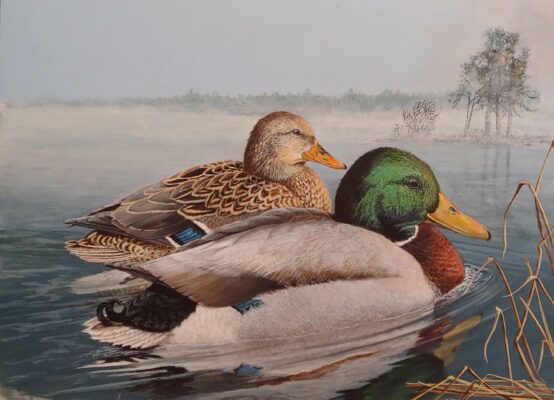 Teaching art classes to children and commission work keeps her busy. Along with commission work on painting people’s dogs and cats, Barbara has been painting ducks for hunting lodges. She created a painting for Ducks Unlimited and has been their artist of the year. She does commission paintings of lake homes with ducks flying over the houses.

In her spare time, Barbara will paint places where she has camped over the years with her dog, PeeWee. She has painted landscapes and seascapes from these road trips. She is working on a book, “Rides with Dogs,” about the adventures traveling with her dog and camping that she plans to have published this fall.

Barbara has written several book mysteries for young readers. She enjoys writing. “Sometimes it seems there are two people in me,” says Barbara, “one wants to write and the other wants to paint.”

While the artist lives outside Auburn, her studio changes. She has converted a wooden building on their property into an art studio. She also enjoys painting in the house where there is a glass door and windows with good light. She can see her dog on the deck and birds at the feeder while she paints.

Barbara feels blessed to paint in this peaceful setting that gives life to many of her works as deer, hawks, possums, turkey, and raccoons that “tiptoe across the field and woods” surrounding her.

“Late in the afternoon,” she adds, “as the sun sinks slowly beyond the trees, the coyotes begin their serenade to their world with yips and howls and a cacophony of music to my ears. It is nothing short of awe-inspiring and a wonderful setting for a wildlife/nature artist.”

Barbara enjoys anyplace outdoors, including being in the woods where she feels closer to the Creator. “When there is a thunderstorm,” she says, “I like to sit on our covered porch and watch it roll in. One of my favorite road trips was with my husband Ken and three dogs on top of a mountain in New Mexico. A thunderstorm came up and with rain hitting the tent, it was one of the most wonderful camps.”

Over the decades, Barbara’s art has won numerous state, federal and international awards, 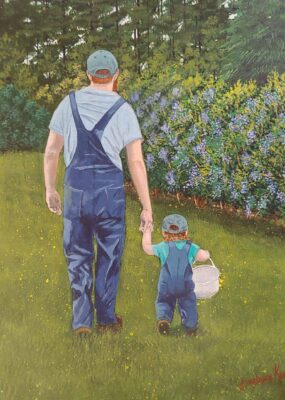 and her art is collected by animal and nature lovers across the globe.

“I absolutely love painting,” states Barbara. “I love the process and every painting I do. I give thanks to the One who blessed me with the ability to portray His creations.”

Much of the proceeds from her commissions go into food, safety and medical needs for rescue animal sanctuaries both locally and internationally. “The animals have provided me with a livelihood that gives me happiness and satisfaction. It only seems right to return some of that back to homeless and abused animals.”

For those who wish to contact Barbara, they can go to her Facebook page “Barbara Keel Art” and online at barbarakeel.com.